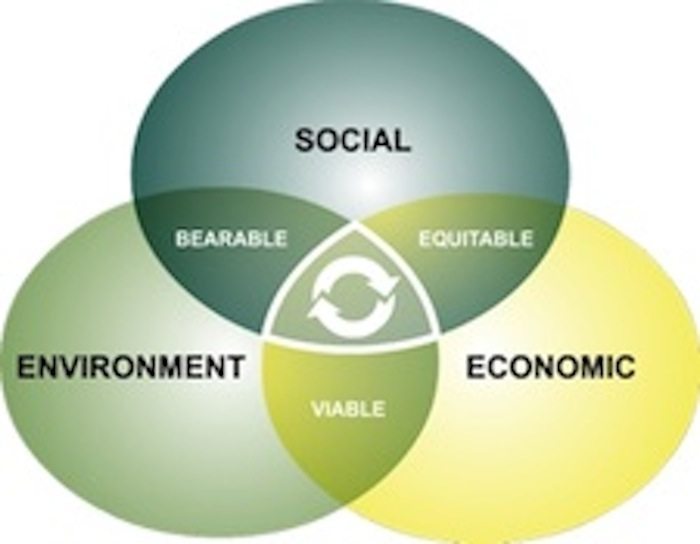 A variety of factors are coalescing to make 2013 a pivotal year in the growth of sustainability. Year after year, sustainability has gained ground as an increasing number of organizations are incorporating environmental and social concerns into their strategic planning.

The corporate community cannot ignore the overwhelming logic of the business case for sustainability. The benefits include reduced input costs, increased risk mitigation, lower healthcare costs, greater worker productivity, improved employee attraction and retention. Sustainability is more than a competitive advantage, it is a competitive necessity.

According to the ACCA, KPMG and Fauna & Flora International report (PDF), nearly half of all corporations identify natural capital (the stock of capital derived from natural resources such as biological diversity, ecosystems and the services they provide) as a material issue for their businesses.

Environmental Business Journal research titled EBJ’s Global Environmental Markets 2012 indicates that in 2011, despite the fragile global economy and political disinterest in environmental issues, the $866 billion global environmental market grew by four percent, which is more than GDP growth at 3.9 percent.

In 2011, the global environmental market grew significantly more than the traditional infrastructure segments. EBJ research indicates that the largest sector was solid waste management ($140.9 billion), followed by water utilities and water treatment works. Clean energy systems and power ranked as the fourth largest segment in 2011, with growth of 11 percent. Only resource recovery grew faster, at 13 percent.

Resource development is growing as modernizing economies develop the energy and raw materials needed for industrial growth. In 2011, the consulting and engineering segment contributed $54.8 billion to total global environmental revenues.

Early interest in sustainability was focused on protecting against legal challenges and reducing costs. However, a study conducted by Siemens and McGraw-Hill Construction indicates that this is changing. According to the study, titled “Greening of Corporate America,” companies are getting on board for reasons beyond the immediate legal and cost related issues. This research indicates that the percentage of firms who engaged sustainability due to legal obligations or costs, fell by almost half from 33 percent in 2006 to 17 percent in 2012.

In 2012, a total of 42 percent of companies said that sustainability plays a key role in their business operations, that is more than twice as many as in 2006. The role of the chief sustainability officer also continued to rise in 2012, along with dedicated sustainability budgets.

Since 2006, corporate sustainability has become a standard element of business strategy. By 2009, almost twice as many companies (30 percent) saw sustainability as centrally oriented to their business operations, including the sale of “green” products or services, as compared to 2006.

A 2012 Deloitte survey of 208 global CFOs from 10 countries found that more than 70 percent are fully or periodically involved in all aspects of sustainability strategy and governance at their firm.

An October 2012 BSR Globscan survey of 556 professionals from business, NGOs, government, and academia around the world indicated that the integration of sustainability into core business functions and across the supply chain is the most important leadership challenge they face. This study noted:

According to a Verdantix survey, corporate spending on energy, environment and sustainability management in 2013 will grow by just under 10 percent. The study titled, “Global Sustainability Leaders Survey: Budgets and Priorities” report, indicated that 46 percent of respondents expect their spending to increase by up to 10 percent in 2013, while 39 percent face flat budgets. The report is based on interviews with 250 sustainability decision-makers at firms with revenues over $250 million, across 13 countries and 21 industries.

A total of 11 percent of those surveyed anticipate increasing their spending on sustainability by more than 10 percent in 2013 compared to 2012. Approximately 25 percent of firms will spend at least 2 percent of revenues on energy, environment and sustainability initiatives.

The Carbon Disclosure Project report, titled “Reducing Risk and Driving Business Value,” indicated that more than 70 percent of respondents are concerned about the cost implications of climate change, and as a result, 38 percent have set emission reduction goals.

The 2012 Deloitte survey titled “Drivers of Long Term Business Value” indicated that by 2020, CEOs expect sustainability to be fully integrated into corporate capabilities, processes and systems, and across global supply chains and subsidiaries.

A 2013 Mark Lee article published in GreenBiz explores the idea that now is the time for sustainability to make major leaps forward. In the article, he reviews how the mechanics of measurement, benchmarking and targeting are important but he also emphasizes the timing of shifts, including how to predict, address and capitalize on these shifts.

Lee points to amazing shifts that are occurring in society, generally and specifically endemic to sustainable development in the U.S. He sees progress on gay rights, immigration reform and climate policy. In California, there is the new cap and trade program that went online in 2012 and in the North East, there is the Regional Greenhouse Gas Initiative. Finally, we are seeing a new energy in civil society with people demanding action on climate.

As Lee describes it, there needs to be a connection between the vision, metrics and goals, corporate sustainability, leadership and wider societal change. Individuals and organizational entities must continue their work with efforts like the vision-performance-engagement framework. However, we also have to pay attention to the larger context.

Lee sees this as a movement with little downside risk, he also believes that we have a window of opportunity in 2013 in which societal foment and sustainability can come together to deliver new and exceptional results.

While sustainability implementation was once fraught with risk, sustainability is now seen as a powerful approach to reduce risk and establish competitive positioning.
—————–
Richard Matthews is a consultant, eco-entrepreneur, green investor and author of numerous articles on sustainable positioning, eco-economics and enviro-politics. He is the owner of The Green Market Oracle, a leading sustainable business site and one of the Web’s most comprehensive resources on the business of the environment. Find The Green Market on Facebook and follow The Green Market’s twitter feed.