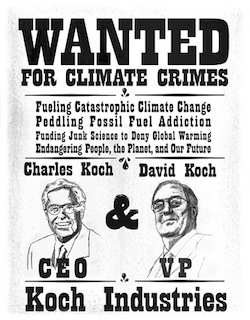 Oil billionaires David and Charles Koch use their oil wealth to misinform Americans and influence the GOP. The Koch brothers have spent $55 million to fund climate denial front groups, their agenda includes efforts to undermine the Environmental Protection Agency (EPA). Koch Industries has given generously to conservative politicians throughout the country at both the federal and state level and many Republicans including GOP presidential candidates are known to have ties to the brothers.

The Kochs use Republicans to resist climate and energy legislation and protect their oil interests. One of the reasons Americans are so ill informed about climate change is due to the barrage of misinformation from the Koch brothers’ network of front groups. The Koch brother are directly or indirectly involved with a variety of organizations that actively work to misinform lawmakers and the American public.

The Koch brothers have a long history of influence peddling through front groups like Americans for Prosperity (AFP), which had a role in the formation of the Tea Party. Many Republican presidential hopefuls have been in attendance at AFP events like the annual Defending the American Dream Summit. These Summits focus on issues like reversing environmental protections, preventing new environmental laws and promoting policies that benefit big oil.

This climate denying duo has developed a large network of alliances within the Republican Party, including some of the leading contenders for President. Herman Cain, Mitt Romney, Michele Bachmann, Rick Perry, and Rick Santorum have all been shown to have close ties with the Kochs.

Although Herman Cain has recently withdrawn from the presidential race, he has close ties with the Koch Brothers and the AFP. Cain has been a featured speaker at AFP events for years. In 2005 and 2006, Cain was the public face of AFP’s “Prosperity Expansion Project.”

“I know the Koch brothers,” Cain told CNN host John King. “The Koch brothers helped to start an organization called Americans for Prosperity, and I did some speaking when they were starting that organization. I’m very proud of the relationship I have with the Koch brothers. I have also attended some of their seminars and have found them very informative.”

Cain’s campaign manager Mark Block and a number of aides have worked for Americans for Prosperity, or the AFP. Cain’s “9-9-9” plan to rewrite the nation’s tax code was devised by Rich Lowrie who served on an AFP advisory board. Cain’s spokeswoman Ellen Carmichael, who left the campaign, was an AFP coordinator in Louisiana. His campaign’s outside law firm also represents the AFP and at least six other current and former paid employees and consultants for Cain’s campaign have worked for AFP in various capacities.

Cain continues to work with the group. On November 4, Cain spoke at the annual AFP’s “Defending the American Dream” summit.

In the last presidential election, David and his wife each gave the maximum $2,300 donation to Romney’s campaign. According to a leaked campaign memo, the Koch brothers are “the financial engine of the tea party.”  To secure support from the Kochs and other conservatives, Romney has switched his position and embraced climate denial.

The memo also says that Romney was scheduled to meet with David Koch on Aug. 28 at his home in Southampton, N.Y., where Koch held a major event for Romney in 2010. Ironically, extreme weather (Hurricane Irene), a corollary of climate change, prevented them from meeting. The two last met in January 2011 in Manhattan at the Links Club.

Koch endorsed Romney in 2008, and was one of Romney’s first major campaign fundraisers for the 2012 elections. Romney also spoke at the Defending the American Dream Summit on November 4, 2011.

Rep. Michele Bachmann (R-Minn.) may have been the Koch’s top pick for the 2012 presidential race. The Kochs have been providing financial support for her political run for President since she announced her candidacy.

In late May, KochPAC donated $10,000 in one day to Bachmann-linked committees ($5,000 to her 2012 congressional re-election committee and $5,000 to her political action committee, MICHELE PAC).  According to federal campaign records, the committee has given $25,000 to the Minnesota congresswoman since 2006, excluding the May donation.

Rick Perry’s contempt of environmental policies and protections make him an ideal Koch brother’s candidate. Perry has repeatedly met with the conservative billionaires. In the middle of the special legislative session in June, 2011, Perry flew to Vail, Colorado, on a donor’s private airplane to a Koch Brothers summit. Governor Perry is known to have received $76,000 in contributions from the Koch network in the last gubernational election. In 2010, KochPAC gave $50,000 to Texans for Rick Perry.

Rick Santorum has a history of KochPAC financial support. Between 1999 and 2005, federal records show, Santorum election committees received $16,000 from the committee.

The ties between the Kochs and the Republican presidential hopefuls are troubling to say the least. The Kochs are hedging their bets and spreading their influence and wherever Koch influence is to be found, environmental abuse is sure to follow. 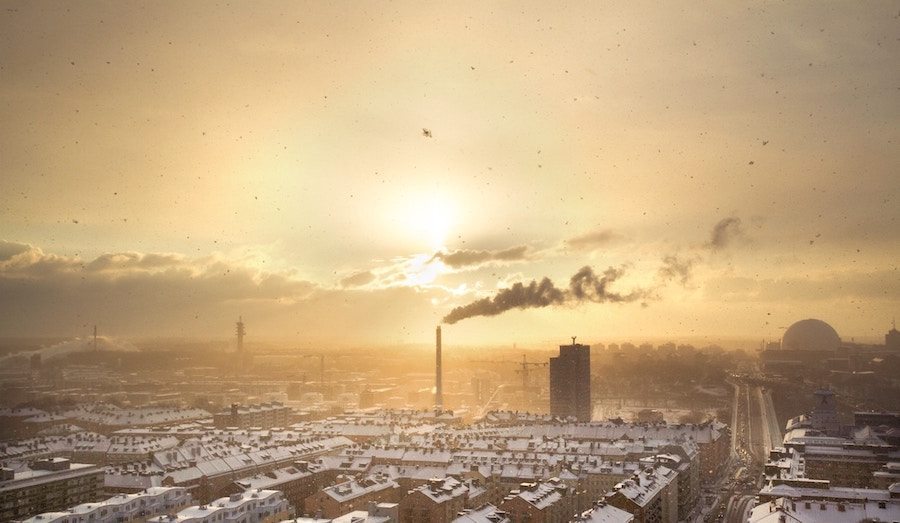