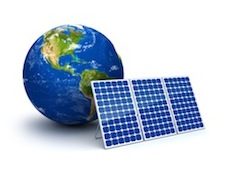 Green energy is one of the most rapidly expanding industries in the world right now due to so many people looking to do their part to help save the planet. With so much focus on solving global warming and reducing air pollution, smarter and cleaner forms of energy are being looked at very closely by scientists and consumers. There are several cool facts about solar power that can change the world.

——————-
Kriss Bergethon is a solar expert and writer from Colorado.  Visit his site at Solar Panels for more information.