The Obama administration finally agreed to assemble solar panels on the roof of the White House. It’s encouraging news, considering that Congress was unable to pass climate change legislation this year.

While Congress may not get it, citizens across the country have committed to building green using energy-efficient guidelines such as LEED (Leadership in Energy and Environmental Design), a rating system set out by the U.S. Green Building Council. Green buildings are no longer reserved for the wealthy or the province of distant countries. They are becoming a well-traveled path to a sustainable future.

Consideration of inward, rather than outward, urban development encourages major cities to be more self-contained and sustainable in the realms of energy and water usage. Inclusion of building features such as solar panels and energy-efficient window and wall insulation insure that energy is self-produced and not wasted.

Activist Bill McKibben and 350.org led the campaign to reinstall solar panels on the White House. McKibben and several college students began their road trip in Maine and delivered the panels on Sept. 10. The the solar panels were rejected at first because the administration did not want to “give the right another talking point comparing Obama to Jimmy Carter,” writes Salon. But the Obama administration changed its stance and accepted the two panels Oct. 5. Beth Buczynski of Care2 has the story.

Although the installation of the solar panels is encouraging, it doesn’t change the fact that Congress has not passed any substantial climate legislation this year. Furthermore, President Barack Obama faces an uphill battle with Congress regarding the regulation of carbon emissions, according to Agence France Presse in AlterNet.

At Grist, David Roberts claims that many senators have opposed climate legislation not only to align with their party, but because of ignorance. Roberts quotes a senate staffer:

“That fact is, he said, most senators, even the ones directly involved in the fight over climate policy, don’t know the rudimentary facts about climate change or clean energy. They understand very little about the policies in question or how those policies will affect their constituents.”

Yet sustainable development has gained momentum, despite a lack of congressional backing. Cities such as Portland and Seattle have championed self-sustaining, inward development, while Chicago is building its first pre-fab home this fall. LEED is a common, third-party evaluation of a building’s environmental sustainability. The rating system measures carbon emissions, water conservation, energy efficiency and consciousness about materials and resources used for the project.

Additional building standards have also emerged. Architect Jason McLennan has created the “Living Building Challenge”, which requires new structures be self-sustaining in regards to energy and water usage. Jonathon Hiskes of Grist writes that although the rating system is more strict than LEED, around 70 buildings have striven to meet the challenge.

“The point of our whole movement is to create abundance of life, and a healthy ecosystem for all future generations,” McLennan told Hiskes. “We have a current industrial system where nobody knows what’s in our materials, and there’s no plan for where they go with those chemicals when their lifespan is over.”

The rise of the eco-city

Congressional members and ecologically concerned citizens should look abroad for the best examples of sustainable building initiatives. Tianjin, China, the country’s third largest industrial city, began construction of one of the country’s first eco-cities. The proposed city, which would be 11.6 square miles, would house a population of 350,000 and include contributions of sustainable building material from Japanese company Hitachi and Dutch company Philips.

Tianjin’s developers say the city “will serve as an ultra-efficient alternative to ill-planned and heavily polluting mega-cities not only elsewhere in the country, but around the world.”

Siben Linden, a well-known German eco-village, is composed of straw buildings that serve as multi-family homes for around 80 adults and 30 children, according to Athena and Bill Steen of Chelsea Green. The village is agriculturally self-sustaining and is powered by photovoltaic systems. As a result, the total carbon emissions equal about 10 percent of the average German energy usage.

The future may seem far away, but with regards to sustainable development, it’s closer than we think. Congress just needs to realize it. 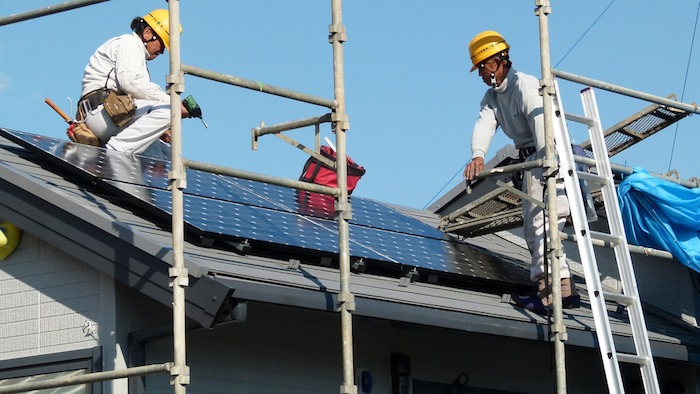 3 thoughts on “Weekly Mulch from the Media Consortium: White House Solar Panels and Why Congress Just Doesn’t Get It”