Dale Hurd writes today at CBN.com (Christian Broadcast Network) of the satisfaction we might enjoy if we were to endure a short ice age (perhaps “a year or so”) so that we can witness and savor the embarrassment of climate change “alarmists” (code for “Al Gore”).

He then cites several recent headlines concerning the winter-like weather throughout much of the eastern United States this past week. Okay, the last time I repsonded to some idiot spouting off about global warming and climate change, denying its existence based on a glance out the window at the day’s weather, I was taken to task and accused of calling people names because I wrote “climate is not weather” three times. It’s unclear to me how that was interpreted as name-calling, but there you are. I don’t want to call anybody names so I’ll let all that go. (oops, I did use the word “idiot” didn’t I?)

I’m just trying to figure out what the point of Hurd’s piece is. For Hurd then goes on to talk about some “journalistic genre” known as “nature as villain” interposing what I’m sure he assumes are liberal buzzwords for manmade environmental destruction (Exxon-Mobil, GW Bush, SUV’s) with the actual reporting on an earthquake and tsunami in South Pacific near the Solomon Islands last week. Making the natural event that displaced and will kill the pristine underwater reefs of Ranongga, an island in the western Solomons.

He goes through his little exercise and leaves us with this to ponder: “Nature destroyed by nature? Hmmm…that doesn’t make sense.”

Ummm, what doesn’t make sense is your point, Mr. Hurd, whatever it is; or what you’re even really talking about.
I suspect even Mr. Hurd doesn’t know what Mr. Hurd is talking about.

Look out your window Dale, how’s the climate today?

You’d do us all a big favor if you’d stick to what you know. 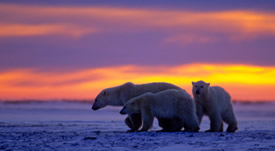