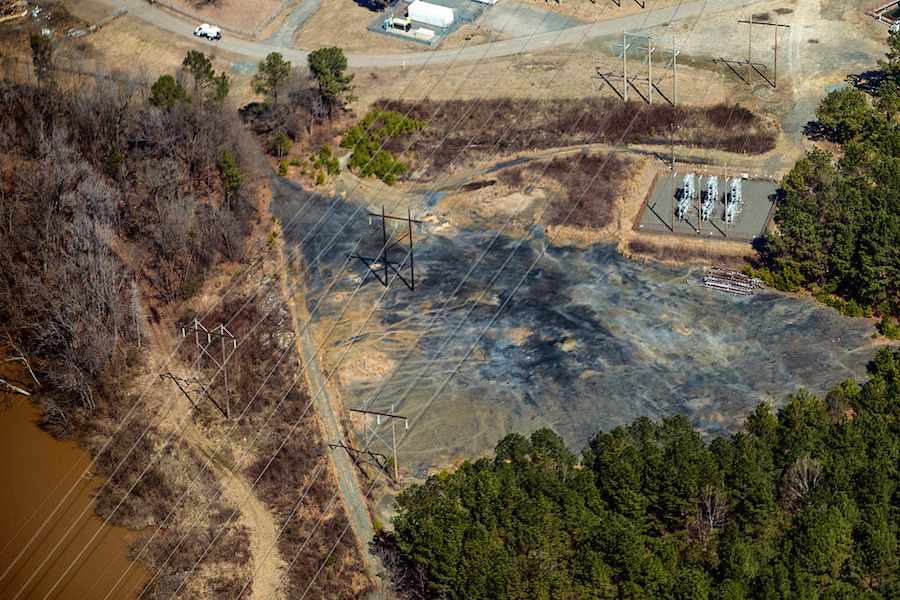 “Do you know what your coal ash pond is doing tonight?”

EarthJustice, via the Freedom of Information Act, pressured the EPA back in 2012 to release the locations of hundreds of previously unknown coal ash dump sites. The latest tally puts the number at nearly 1,400 nationwide.

It sounds benign – even perhaps recyclable – something you might spread in the garden for fertilizer, or use as landfill, or even stuff in an abandoned mine or two; oh, and, yes, cover a wintry road to provide better traction. And lest we forget, it is a major ingredient used in the production of cement and wallboard.

Regardless, there’s plenty left to leach out from unlined ponds, to stuff in abandoned mine shafts, or dump in landfills, thanks to the 589 coal-fired plants in the U.S. (2011).

Those carbon- emitting plants were pounced on by President Obama in his climate speech at Georgetown University just last year. Specifically, he addressed coal-fired power plants in use on federal property and the “heat trapping pollution they cause, not to mention the tons of coal-ash to be disposed of.

Of course, that speech was a precursor to issuing his recent executive order that opened the way for the EPA to cut some 500-million metric tons of CO2 a year by 2030. Ultimately, wind and solar options will be powering some 6 million homes by 2020 once more permits are extended throughout public lands.

In the meantime, what about the coal ash?

A byproduct of coal combustion, coal ash is a grayish compound and the second largest industrial waste source in the United States. To get an idea the enormity of this dumping problem, bring up Google Earth and mark the Washington DC area; then, zoom out until Melbourne, Australia surfaces. In air miles the distance is 10,190, which is how long a train filled with 140 million tons of coal ash would extend, and how much coal-fired plants produce annually nationwide.

Some people might think that’s okay as long as it’s not in their backyard; that might’ve been the case back in 2008 with the TVA Kingston, Tennessee coal-ash disaster:

It was just before Christmas 2008 in Kingston, Tennessee when the earth retaining wall at the Kingston Fossil Plant erupted (40 miles west of Knoxville), spilling one-billion gallons of coal ash, or about 1.7 million cubic yards of wet coal ash into a valley to the north; destroying homes to the east and flowing into the Clinch and Emory rivers.

Aside from the untold havoc to the environment for who-knows-how-many-years, the TVA victims received a settlement of $147 million, but only after they signed waivers excluding them from any medical suits – forever. Sadly, the 140,000 pounds of arsenic, and other toxins, that poured into the Emory River in 2008 equated to a settlement for the victims of a little over $1,021 for each pound of spillage.

How do you recompense victims of the TVA spill, as well as the Duke Energy disaster, for being exposed to toxins like chromium, lead, manganese, nickel and thallium? The list is startling. In fact, the Physicians for Social Responsibility (PSR) points out how vulnerable we are from the wet storage of coal ash, and how surface water and aquifers are susceptible to contamination from the compound’s leaching into the soil and streams.

The toxins can be cancer producing, as well as causing other health issues, notes the PSR. The toxins include, but are not limited to:

For newborns, water with high levels of arsenic can increase the risk of urinary cancer later in life. Even low levels of exposure can cause nausea, numbness in hands and feet—even decreased vision and blindness.

For starters, from the 1920’s up until the mid-’70s, this compound was a prime ingredient in rat poison; it was banned because other unintended victims were eagles and even humans.

Elevated levels were present after the TVA spill, as well as the recent Eden power plant debacle in North Carolina; the coal ash pond gave way, dumping 82,000 tons of coal-ash slurry along a 70-mile area of the river.

Just two months after the Duke Energy spill, high levels of thallium, boron and manganese were still exceeding limits allowable in the groundwater.

Don’t worry – the EPA has said all along that it’s not a hazardous waste!

But why hasn’t the EPA ever classified coal ash as a hazardous waste? In a recent lawsuit brought by the PSR as well as a number of Native American tribes and other entities, that may well change in December 2014. Then, the EPA must decide if the “residual” will be classified as a hazardous waste, or a solid waste.

The Sierra Club noted in a recent survey of 600 people that 83 percent wanted to see coal ash regulated as a hazardous substance.

A new power plant in Tuscaloosa, Alabama (Southern Co.) will bring new hope to fossil-fuel diehards. The $5.2 billion project might well “determine the future of coal in the age of global warming.”

If successful, the coal will be pressurized into a gas, thereby allowing the carbon dioxide to be pumped and stored underground.