“In order to learn the nature of the myriad things, you must know that although they may look round or square, the other features of oceans and mountains are infinite in variety; whole worlds are there. It is so not only around you, but also directly beneath your feet, or in a drop of water.”

Education is a vital part of forging a viable future for life on Earth. The confusion surrounding climate science is a major impediment preventing the U.S. from mustering the political will necessary to aggressively engage global warming. Climate science is so woefully misunderstood that some children grow up believing in half-truths and bold-faced lies.

Mark McCaffrey one of the authors of a recent report titled “Toward a Climate and Energy Literate Society” referred to the state of climate change education in the U.S. as “abysmal.” He added that 80 percent of students do not feel like they understand climate change based on what they have learned in school. Two-thirds of students said that they are not learning much about it.

It is no secret that misinformed youth become misinformed adults. An April 2, 2013 Pew research Poll found that there is an alarming and growing lack of understanding among adults in the U.S. A third of Americans do not believe that global warming is serious, more than a quarter think there is inadequate proof and almost the same number attribute climate change to natural patterns.

Clearly there is a need for sweeping educational reforms that include teaching the scientific veracity of global warming.

Efforts are currently underway to provide national standards that will help to educate American students about climate science. The forthcoming K-12 science learning standards are expected to counter the irrational ignorance of climate change scepticism.

In 2011, the National Research Council published “A Framework for K-12 Science Education,” This document guides the development of specific standards for use by teachers, districts, states, curriculum developers, and researchers.

Subsequently, in a highly collaborative effort, Next Generation Science Standards (NGSS) were developed by the National Research Council, the National Science Teachers Association, the American Association for the Advancement of Science, the bipartisan nonprofit Achieve and 26 states. There have been two successive drafts that have entertained broad public and expert commentary. Now the group is about to release its final draft.

As reported by Inside Climate News, these new national science standards are expected to make the teaching of global warming part of the public school curriculum. It is recommended that climate change be taught in classes ranging from earth science to chemistry.

Starting in elementary school, educators will teach students about the evidence for man-made climate change. By the eighth grade, students will be expected to understand that “human activities, such as the release of greenhouse gases from burning fossil fuels, are major factors in the current rise in Earth’s mean surface temperature (global warming).”

A total of more than 40 states appear poised to accept these standards, including the 26 states that contributed to the NGSS and 15 others. The widespread acceptance of these standards will go a long way towards separating fact and fiction in the U.S.

Predictably, some right-wing organizations are resisting the NGSS initiative, including the Heartland Institute, which is developing its own school curriculum to promote climate skepticism. According to strategy documents leaked last year, the Heartland Institute is spending hundreds of thousands of dollars to develop a curriculum designed to question basic science, like the fact that carbon dioxide is a pollutant, and to cast doubt on the scientific veracity of global warming. The curriculum is being written by David Wojick, a prominent source of misinformation and a well known climate change sceptic.

The NGSS are important guides, but they are not mandatory.  Nonetheless, in more than a dozen states, conservatives have rallied with “academic freedom bills” that mandate the teaching of anti-scientific views on global warming.

These “academic freedom bills” are twisted misnomers, as they are neither about academics nor are they about freedom, unless of course you are talking about the freedom to misinform. These bills demonstrate just how pernicious ignorance can be and they reinforce the importance of education.

While education can overcome ignorance, it takes time. When this generation of high school students becomes adults, the challenges posed by climate change will be worse than they are today, perhaps even beyond tipping points from which there is no return. While education is the key to ecological betterment, the question is, do we have the time.
——————
Richard Matthews is a consultant, eco-entrepreneur, green investor and author of numerous articles on sustainable positioning, eco-economics and enviro-politics. He is the owner of The Green Market Oracle, a leading sustainable business site and one of the Web’s most comprehensive resources on the business of the environment. Find The Green Market on Facebook and follow The Green Market’s twitter feed. 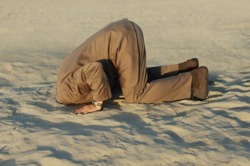 8 thoughts on “The Promise of Climate Change Education Standards”