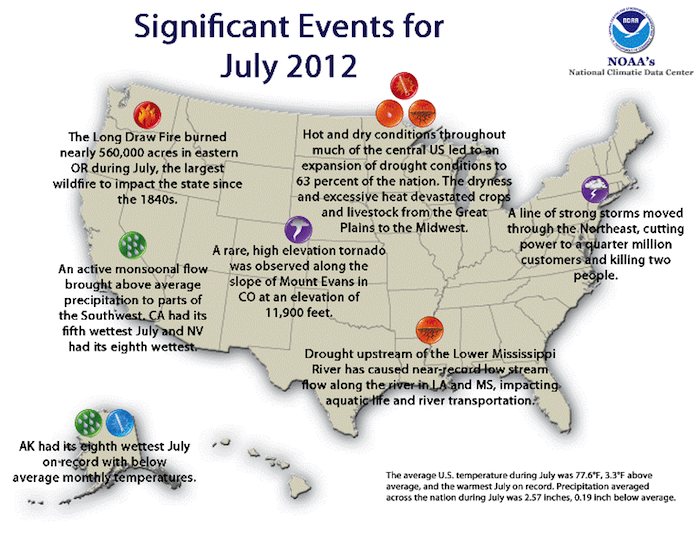 The National Oceanic and Atmospheric Administration (NOAA) reports that last month was, on average, the hottest July on record for the contiguous United States, beating the previous record set in the dust bowl of 1936. The past 12 months have been the hottest ever recorded in the US, with more than 27,000 heat records broken so far this year, more than the 26,674 for all of 2011, even with the Texas-sized drought that sizzled throughout the state last summer. Last year also saw Oklahoma setting the record for the all-time hottest average summer temperature for any state ever recorded. But that was last year.

This year, drought has extended through 63 percent of the Lower 48, according to the US Drought Monitor, with a peak (so far) on July 24 when nearly 64 percent of the contiguous states were under drought conditions, the highest ever in the Drought Monitor’s 13-year history. The areas of the country suffering “extreme to exceptional” drought conditions more than doubled, rising from 10 percent in June to 22 percent in July.

According to NOAA, the average July temperature in the contiguous United States stood at 77.6 degrees Fahrenheit, 3.3 degrees above the 20th century average and the warmest July since record keeping began in 1895. The previous hottest July was in 1936 when the average temperature was 77.4 degrees F.

As summer progresses, it may seem like the worst is over, and hopefully that is so. But in the final four months of 2010 8,636 record daily highs were tied or set. In the same period last year (Sept.-Dec.) 5,800 records were matched or beaten.