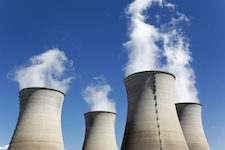 Dear EarthTalk: Thorium is a naturally occurring element that is supposedly more available, more efficient and safer to use than uranium for generating nuclear energy. Is this true and, if so, why haven’t we made the switch?    — Jane Westermann, Austin, TX

Thorium, a naturally occurring radioactive element found in abundance in the Earth’s crust all around the world, might well be a better fuel source than uranium for nuclear power generation for a variety of reasons. First and foremost, just one ton of the silvery metal can produce as much energy as 200 tons of uranium or 3.5 million tons of coal, according to Nobel laureate Carlo Rubbia of the European Organization for Nuclear Research (CERN). Another advantage is that it comes out of the ground as a 100 percent pure, usable isotope. Unlike uranium, which contains only 0.7 percent fissionable material, thorium doesn’t require enrichment to be used in nuclear reactors. Also, the spent-fuel waste from thorium fission cannot be re-formulated for nuclear weapons like plutonium, the waste product of uranium-based fission.

Also, proponents say that thorium doesn’t require the high temperatures and mitigation equipment of uranium-based reactors. “The plants would be much smaller and less expensive,” Kirk Sorensen, a former NASA rocket engineer and now chief nuclear technologist at Teledyne Brown Engineering, told the UK’s Telegraph last year. “You wouldn’t need those huge containment domes because there’s no pressurized water in the reactor.” With no high temperatures, thorium reactors can’t “melt down” and release radiation.

“Once you start looking more closely, it blows your mind away,” adds Sorensen. “You can run civilization on thorium for hundreds of thousands of years, and it’s essentially free.” The advocacy-oriented Thorium Energy Alliance reports that there is “enough thorium in the U.S. alone to power the country at its current energy level for over 1,000 years.”

Nuclear researchers in the U.S. first contemplated using thorium as a nuclear energy feedstock back in the 1940s, but its lack of feasibility in making nuclear weapons put it on the back burner, where it has sat for the last six decades despite various attempts to revive the technology for practical use. In Russia, China and India, thorium reactors represent the next generation of nuclear power. India possesses about a quarter of the world’s thorium reserves. The country is working to develop a network of large thorium-based reactors, and plans to meet 30 percent of its electricity needs with thorium by 2050.

Many nuclear advocates and environmentalists alike don’t see thorium as the savior its supporters make it out to be. For one, uranium is still relatively easy to come by and inexpensive, and the nuclear industry is set up to run on it. Changing over to thorium would be expensive, and who knows what unforeseen problems may arise with full-scale deployment. Perhaps most important, some analysts worry that putting more eggs into humanity’s nuclear basket will surely further delay the transition to a truly green economy that runs on clean renewable energy from the sun, wind and other so-called alternative sources.