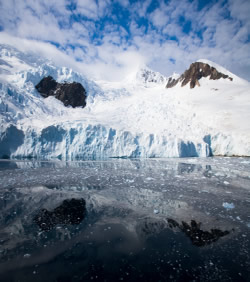 According to a research study just published in the journal Nature Geoscience, climate change will persist, and in some parts of the world intensify, from the increased levels of atmospheric CO2 long after humans stop burning fossil fuels – for a millennium or more, the report says.

In even a best case, real-world scenario where anthropogenic carbon emissions essentially stop by the year 2100, the consequences on climate will last throughout the next one thousand years, and in epoch-changing ways.

The seas are the great heat sink that have so far absorbed much of the heat and most of the CO2 from the atmosphere. Eventually the ocean will be able to take no more and begin to give back the heat – as decadal trends of consistently warming seas now portend. By the year 3000, if carbon emissions continue to 2100, the West Antarctic ice sheet will collapse and sea level will eventually rise by at least four meters (more than 13 feet).

Obviously, forecasting climate out 1000 years can only point to probabilities and not exact circumstance, and therefore is “an art and not a science,” as Andy Soos writes in the Environmental News Network, but the study reinforces other research, such as a recent report from the National Academy of Sciences, the concludes climate change is now irreversible “from the standpoint of a human lifetime.” In other words, we’re in it already and it where it will lead is increasingly beyond what any human intervention.

The new research adds more detailed projections of long term forecasts in different regions and the effect on specific earth system. As lead author of the report Nathan Gillett of the Environment Canada’s Centre of Modelling and Analysis said when discussing the nature of the research:

The study is also the first to run two scenarios for what happens after carbon emissions have ended – one for 2100 and the other for 2010. The projection for a 2010 cessation of emissions suggests that even though the climate impact will last to the year 3000, the effect could be relatively modest.

“It’s seven days past that deadline, so it’s kind of a science fiction scenario at this point,” said glaciologist and study co-author Shawn Marshall.

If carbon emissions don’t stop until 2100 – more in the realm of reality than science fiction – warming could be as much as 4 degrees Celsius, or about 7.2 degrees Fahrenheit, by the next millennium, almost certainly destabilizing the West Antarctic ice.

“The choices we make are sort of a multicentury legacy,” Marshall said. “The difference between 0.6-degree warming and 4-degree warming in terms of the stability of Antarctica is huge.”

Consequences of climate change through the ages

Clearly, the choices humanity makes now – every human being now alive – will reverberate through the next millenium. That’s not the kind of thing anyone is really equipped to deal with by nature. It is hard enough to just live our lives, care for our own, and hopefully grow old with some wisdom and dignity.

And so we can be forgiven if we chose not to think about it. Right?

Like it or not that question remains, and must now be answered.