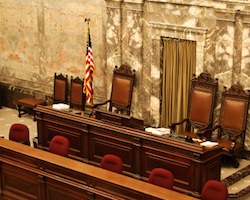 Both bills contain a market-based mechanism to regulate emissions. The proposed bills offer an expedient means of reigning in carbon emissions on a national scale. These programs offer incentives and disincentives while letting the market do the difficult work of setting the price for CO2. Market-based mechanisms like cap-and-trade are functioning well around the world. We also have reason to believe that cap-and-trade will spur long-term job creation.

Despite fears about the costs of cap-and-trade, there are significant costs associated with a business-as-usual approach to climate change. In the final analysis, environmental costs must be understood as economic costs.

President Obama and the Democrats have failed to effectively communicate these facts to the American public. Part of that failure is attributable to massive misinformation campaigns from powerful economic and political interests. Americans are being swayed by these efforts as revealed by polls which show that an increasing number of Americans are questioning the existence of climate change.

Last year, President Obama took steps to impose reform by limiting campaign funding from corporations and unions. However, the President’s efforts to address these problems were recently struck down by the Supreme Court. Corporations are now free to spend unlimited sums of money with the intent of influencing electoral outcomes. For evidence, one need look no further than the recent election of Republican Senator Scott Brown.

The implications for the green agenda are considerable. The massive exposure provided by unlimited funding can be very persuasive. When opposing interests are free to influence the electorate, financing takes precedence over ideas and scare tactics triumph over rational debate.
Election-year politics and growing estimates of stimulus spending will further complicate the passage of a climate change bill.

Although 2009 began with great promise, in 2010 we are forced to concede that deceit is clouding legislative efforts and the electorate is being swayed by misinformation. If key climate legislation is defeated, efforts to manage climate change will languish.

The Obama administration is attempting to regulate US carbon emissions, but progress is being stymied by the entrenched interests of the old carbon based economy.

Richard Matthews is a consultant, eco-entrepreneur, sustainable investor and writer. He is the owner of THE GREEN MARKET, one of the Web’s most comprehensive resources for information and tools on sustainability. He is also the author of numerous articles on sustainable positioning, green investing, enviro-politics and eco-economics.

2 thoughts on “The State of the Green Union: Impediments to a Market Based Mechanism for Emissions Reduction”