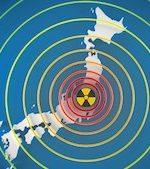 Last week was the 22nd anniversary of Exxon Valdez and the 32nd anniversary of Three Mile Island. This month will mark the 25th anniversary of Chernoybl and the one-year anniversary of the explosion of Deepwater Horizon. Add to the list of horrific unnatural disasters, the current meltdown at the Fukushima Daiichi plant in Japan. Haven’t we learned anything?