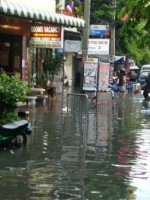 With floods inundating towns and cities, longtime residents of Bangkok and nearby areas of central Thailand, including the ancient capital of Ayutthaya, may wind up having to migrate.

Governments around the world are generally ill-prepared and ill-equipped to cope with, much less manage, forced mass migrations on such a scale, but they would have to if global temperatures increase by just a few degrees by 2100, according to the results of a recently concluded study undertaken by an international group of 12 scientists.