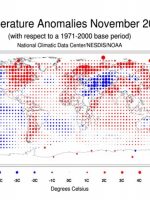 2011 was a record year for extreme weather. It’s also set to become the 10th warmest year since record-keeping began in 1850. November temperatures in the UK, France and globally were among the warmest on record, according to meteorological authorities. Arctic sea ice extent was the third lowest since record-keeping began, while La Nina conditions continued in the Pacific, which doesn’t bode well for spring rains in the US southwest.