Another Look at the Polar Bear in Canada

I wrote last week on a controversial decision by the US Fish & Wildlife service to delay a scheduled recommendation to Department of Interior Director Dirk Kempthorne for consideration of listing the Polar Bear as threatened under the endangered species act. Several environmental groups have threatened to sue the government to force quicker action on “deciding the fate” of the polar bear. Now Arctic Inuit groups …

END_OF_DOCUMENT_TOKEN_TO_BE_REPLACED

If any one particular species has come to symbolize climate change, especially in the north, it is the Polar Bear. Today was to be a special day for the polar bear, with Department of Interior Secretary Dirk Kempthorne deciding, based on a recommendation from the US Fish & Wildlife Service, whether to list the bear as threatened under the endangered species act, the first to be …

END_OF_DOCUMENT_TOKEN_TO_BE_REPLACED

Global Warming and Energy: The Focus on Alaska

Two news reports today seemed juxtaposed in a sort of sad irony, both focusing on Alaska. At a news conference this morning from House GOP members complaining they wanted Democrats to present an “energy bill with energy in it”, complaining that things like liquid coal and oil shale are “off the table” and once again stating their intention to continue pursuit of drilling in the Arctic …

END_OF_DOCUMENT_TOKEN_TO_BE_REPLACED

The Disappearing Ice The leaders of the Nordic nations of Sweden, Finland, Denmark, Norway, and Iceland expressed alarm over the quickening pace of melting Arctic ice, warning that the melt might very soon become irreversible. In a joint statement from the five nations, released after talks in Oslo, environmental ministers stated “The Arctic and the world cannot wait any longer…The climate is hurtling towards …

END_OF_DOCUMENT_TOKEN_TO_BE_REPLACED

Arctic Ice, Arizona, and I am the Walrus

It has been widely reported this year that the Arctic ice melt this summer was the largest on record. Particularly alarming is the speed with which the ice is melting – much faster than climate models have predicted – and that it is not only “seasonal” ice but the permanent ice cover that is shrinking.   It is still too early to know with certainty the full effects the rapidly disappearing ice …

END_OF_DOCUMENT_TOKEN_TO_BE_REPLACED

The Scramble for the Arctic 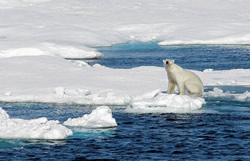 On Friday, August 17th, the current record for Arctic sea ice melt occurred with one full month left in the melt season. Scientists monitoring the Arctic ice attribute some of this season’s unprecedented melt to natural causes, but not entirely. Mark Serreze, senior research scientist at the National Snow and Ice Data Center in Boulder Colorado said on Friday that “We simply can’t explain everything through …