A coalition of public watchdog groups have issued a scathing report criticizing the World Bank’s “Climate Investment Funds,” asserting that the Group’s track record in investing public funds to reduce emissions and mitigate climate change is the clearest evidence against granting the Group any control over such funds.

END_OF_DOCUMENT_TOKEN_TO_BE_REPLACED

Like the atmosphere, efforts to develop and foster sustainable use policies for the world’s ocean require a globally inclusive approach that spans the public and private sectors. Encouragingly, the World Ocean Council at its inaugural meeting brought together participants from around the world and across industry sectors to do just that.

END_OF_DOCUMENT_TOKEN_TO_BE_REPLACED

Managing US national forests in the face of climate change 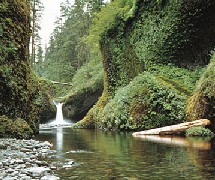 Forest policy and management in national forests needs to be re-thought, re-tooled and better integrated across government departments and agencies, according to new research conducted for the National Forest Restoration Collaborative.

END_OF_DOCUMENT_TOKEN_TO_BE_REPLACED

It looks like something of a breakthrough has been made in the biogas world: a chicken hatchery in eastern Germany has commissioned a biogas-to-combined heat and power generation plant that relies on chicken manure as its primary feedstock.

END_OF_DOCUMENT_TOKEN_TO_BE_REPLACED

Theyâ€™re baaackâ€¦The â€œBig 3â€ automakers are back lobbying Washington D.C. lawmakers to expropriate billions of dollars to guarantee some $50 billion in loans they say they need to carry out restructuring plans. Better idea: Why doesnâ€™t government, along with any private sector investors big and brave enough, just get it over with, take them over, boot out management, restructure and re-privatize them?

END_OF_DOCUMENT_TOKEN_TO_BE_REPLACED

Three environmental groups are once again on the EPA’s case after the agency denied Texas Governor Rick Perry’s request to temporarily waive federal ethanol mandates. The Renewable Fuel Standard, as written, is misguided and lacks sound environmental protections according to the  Clean Air Task Force, Environmental Working Group and Friends of the Earth. It is forcing farmers to plow up marginal land and wildlife habitat, while …