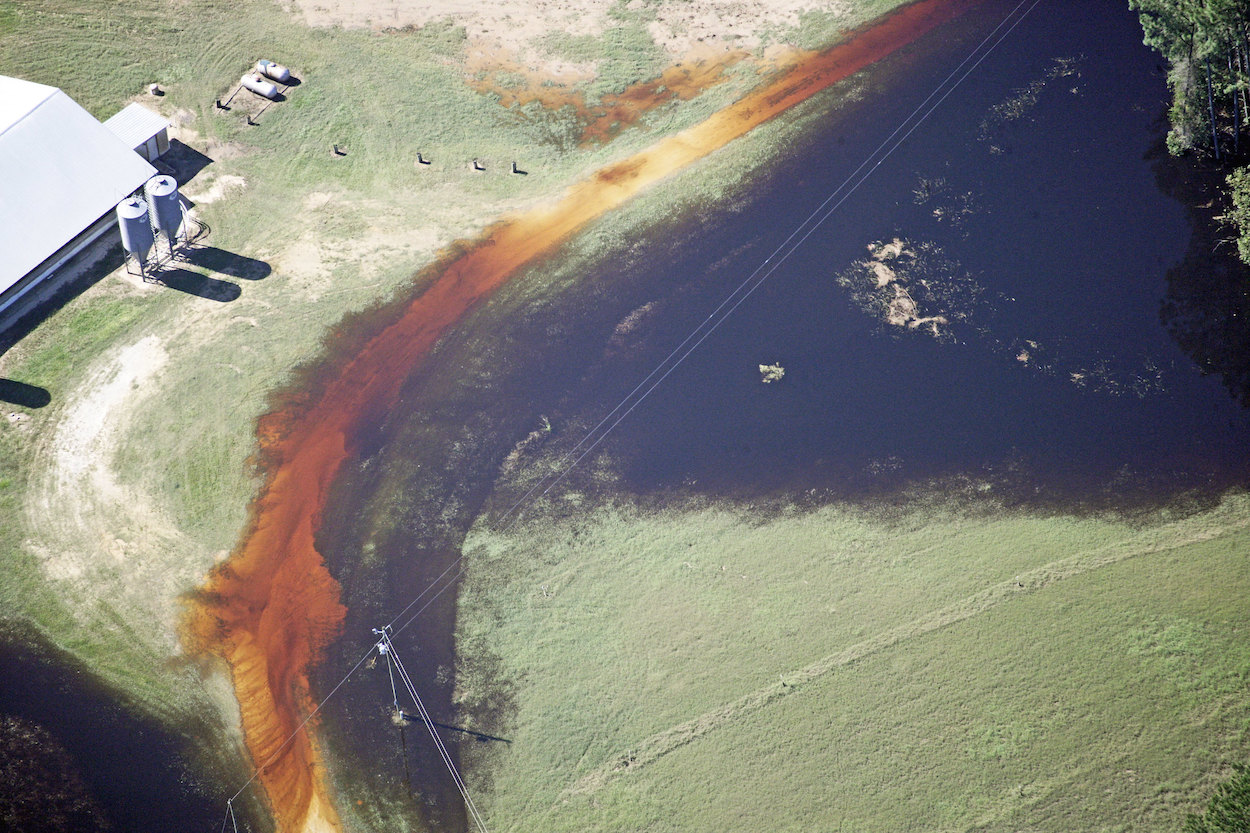 Factory farms produce meat from large numbers of animals housed in close quarters in confined spaces. Not only is it harmful to animals and human health, but also tied to racism.

A Concentrated Animal Feeding Operation (CAFO) is a large scale animal agriculture operation with over 1,000 animal units, which equates to 1,000 beef cattle, 700 dairy cows, 2,500 pigs weighing over 55 pounds, 125,000 broiler chickens, or 82,000 laying hens confined for more than 45 days during the year. A CAFO discharges manure or wastewater into either a human-made or natural ditch, stream, or other waterways. CAFOs are regulated by the U.S. Environmental Protection Agency under the Clean Water Act in the 2003 and 2008 versions of the CAFO rule.

CAFOs produce huge amounts of waste. The smallest CAFO produces the equivalent amount of urine and feces produced by 16,000 humans. That waste is typically not treated, which means that disease-causing pathogens, chemicals, pharmaceuticals, or heavy metals are not removed. CAFO waste emits 168 gases, including hazardous chemicals like ammonia, hydrogen sulfide, and methane. Infestations of flies, rats, and other pests are common around CAFOs and affect people living nearby.

North Carolina is the canary in the CAFOs

North Carolina serves as an example of the dangers of CAFOs and how industrial animal agriculture and factory farms are tied to racism. Three counties are home to the majority of the state’s industrial hog operations. Duplin, Sampson, and Robeson counties are predominantly Black, Native American, and Latinx. The 2010 U.S. census shows that 57 percent of residents of the three counties identified as either Black, Native American, or one of the other non-white categories, which is almost twice the state average. The 2010 census also shows that 38 percent of Robeson County identified as Native American. That is the highest proportion in all of the state’s counties. Duplin County was almost 21 percent Latinx, the state’s highest proportion and Sampson County had the third-largest number of people who identify as Latinx.

A 2017 EPA review of a civil rights lawsuit that alleged there are discriminatory impacts of North Carolina’s permitting of hog operations found a “linear relationship between race/ethnicity [of residents within 3 miles of industrial hog operations] and…density of hogs.” The lawsuit was settled in 2018, with North Carolina agreeing to include air and water monitoring near hog operations.

The Food Integrity Campaign points out that in North Carolina, “the placement of permitted CAFO hog lagoons lines up exactly with the historic location of African American populations.” Hog operations in North Carolina “are predominantly concentrated in low-income communities and communities of color of the state’s Eastern Coastal plain, where corporations are lured by pro-business tax incentives, lax environmental regulations, minimal oversight, and encounter little push back from community residents,” explains the North Carolina Environmental Justice Network (NCEJN).

From 2012 to 2019, the estimated number of chickens and turkeys in the three North Carolina counties increased by 36 percent, according to an analysis by the Environmental Working Group and Waterkeeper Alliance. In Robeson County, the number of chickens and turkeys increased by 80 percent. The number of poultry only increased by 17 percent in the rest of the state. The poultry in the three counties are housed in 4,800 operations and can potentially produce five million tons of waste annually. The three counties already have 4.5 million hogs, which is more than half the total in the entire state.

The health risks of living near CAFOs

Living near CAFOs poses health risks. A 2018 study by Duke University researchers looked at life expectancy in southeastern North Carolina communities near CAFOs. What they found is that residents living near CAFOs had higher rates of all-cause mortality, infant mortality, mortality of patients with multimorbidity, mortality from anemia, kidney disease, tuberculosis, and septicemia, and higher rates of emergency room visits and hospital admissions for infants.

There is something you can do. Consider reducing your meat and poultry consumption. Start small by having a vegetarian day once a week. When you do eat meat, seek out more sustainable sources. Look for meat, poultry, and eggs with the U.S. Department of Agriculture organic label. Organically produced meat, poultry, and eggs come from cows and chickens raised on certified organic pastures. Be a more conscious consumer and help reduce the need for CAFOs.