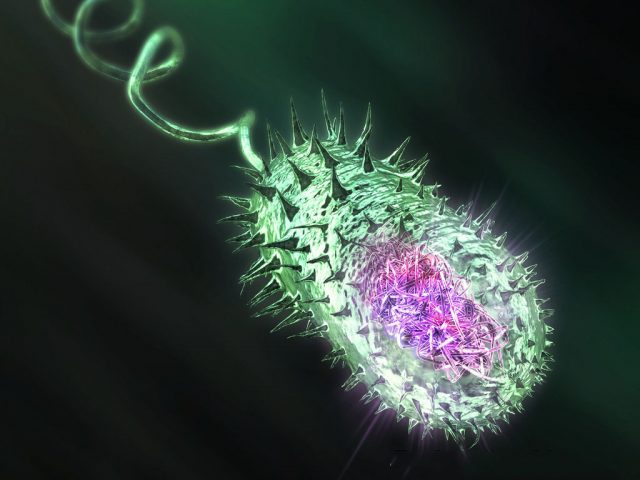 News circulated last week of an anthrax outbreak in a remote indigenous community in the Russian Arctic. Experts believe that rising temperatures have contributed to the outbreak, which led to a mass die-off of reindeer and left 72 nomadic herders, including 41 children, in the hospital.

Warmer temperatures are creating conditions conducive to population booms in other microorganisms that carry and transmit diseases to humans and other species. The trend is evident in the oceans as well as on land, raising the risks of disease outbreaks and epidemics around the world, including in places where they have not been risks historically. Microscopic in size, marine prokaryotes are nonetheless the largest living biomass in the world ocean. While analysis of long-term ecological and paleontological data indicates that climate change has an impact on populations of eukaryotes, microorganisms that have a cell nucleus and well defined cell walls, little is known about the effect of rising sea surface temperatures on prokaryotes, the report authors point out in the research abstract. Having evolved earlier in evolutionary history, prokaryotes, which lack cell nucleii or well defined cell walls, are considered evolutionary precursors to eukaryotes.

In a landmark research paper, an international team of researchers for the first time report that rising sea surface temperatures are strongly associated with booms in populations and infections caused by Vibrio cholerae and other members of this genus of bacteria. Lead author Rita R. Colwell has devoted her career as a microbiologist to studying Vibrio cholerae and other members of the genus. A member of the faculty at the University of Maryland Pathogen Research Institute and Center of Bioinformatics and Computational Biology, Colwell has been conducting groundbreaking scientific research on Vibrio bacteria for decades.

Commonly found in ocean waters, Vibrio do better in warm, coastal waters. Vibrio cholerae carries and transmits cholera, while other species carry other diseases and can cause food poisoning in humans.

Investigating whether or not links exist between Vibrio population booms, infections and ocean temperature, the researchers analyzed seawater samples dating back to 1958 collected in the North Atlantic Ocean as part of the Sir Alister Hardy Foundation for Ocean Science’s (SAHFOS) Continuous Plankton Recorder survey over the past half century. Colwell and fellow researchers from SAHFOS, the University of Genoa, Italy, the U.K.’s Plymouth University and others concluded that rising sea surface temperatures coincide and show strong associations with surges in the number of Vibrio bacteria and infections.

The resulting increase in food and health risks are higher in northern waters where ocean water temperatures are rising faster than global averages. That includes cities, towns, and communities situated around the Baltic Sea in northern Europe, where there has been little risk of infections until now.

“They are now reporting more Vibrio in their waters,” Colwell was quoted in a New Scientist report. “Not because it wasn’t there before, but because the water was too cold [for them to bloom]. Vibrio responds very quickly to temperature.”

The U.S. Centers for Disease Control and Prevention (CDC) has gathered evidence that the same thing, including outbreaks, is taking place in Alaskan coastal waters, according to the news report.

Colwell notes that scientists could develop a computer model to help predict the occurrence of Vibrio outbreaks by incorporating satellite data on sea surface temperatures into the research team’s model. Another microbiologist points to other factors, such as nutrient levels, salinity and population counts of other phytoplankton and zooplankton, that require consideration in order for any such new model to be effective.