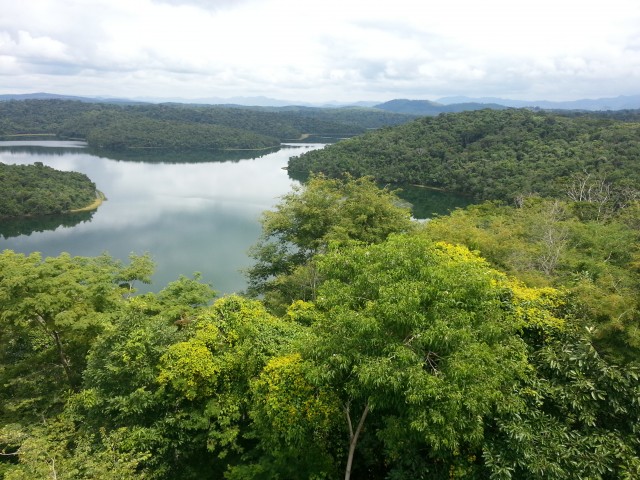 Rising sea levels and heavy storms erode coastlines and threaten freshwater resources and coastal communities the world over. As climate warming raises the pressure and threat level authorities and practitioners are turning to ecosystems-based approaches as cost-effective and less technologically complicated means of addressing the problem.

Found throughout tropical coastal regions, mangrove forests trap sediments and create new land that act as storm and surge buffers, protecting coastal and inland areas from damage. They also provide other vital ecosystem services, including serving as natural waste treatment facilities and nurseries for a diverse range of threatened wildlife.

Sieuwnath Naipal, a professor of hydrology at Suriname’s Anton de Kom University, is leading an effort to help insulate coastal areas from erosion by mimicking nature, Inter Press News Service (IPS) reports. Naipal and his students have been building permeable dams along Suriname’s Caribbean coast. Allowing sea and Amazon River waters to flow in and out, they trap sediments and reclaim land. The accumulation of sediment, in turn, enables new mangroves to take root and grow, accelerating the process and protecting inland coastal areas from erosion. Acting in the name of progress, humans have been cutting down and filling in these vital mangrove forests and other wetlands at a rapid rate. Ramsar, the UN agency in charge of administering the international mangrove and wetland conservation treaty, estimates that 50 percent of global mangrove forest cover has been lost due to human activity,

Located on South America’s northeastern coast, Suriname has been losing coastal land area and mangrove ecosystems at a rapid rate. “The capital (Paramaribo) is near to the coastline and it is nearly equal with the mean sea level.

¨The protection actually is the mangroves and the mangroves are under attack with the rising of the sea level and also the intervention of humans,¨ Naipal told IPS while trying to drum up support for his program at the historic UN climate conference that took place in Paris in December.

Scientists estimate all its mangroves, which cover some 100,000 acres, could be lost in as little as 30 years unless aggressive climate change mitigation and adaptation actions are taken. “Over the last 10 years the coastline has retreated 600 metres at certain locations. It’s a rapid retreat of the coastline so we have to act now,” Naipal pointed out.

Building permeable dykes and dams capable of sheltering 1 kilometer of coastline costs about $6.5 million, no small amount, Naipal explained. The benefits take time to be fully realized, but they are numerous, varied and long lasting.

Some 90 percent of Suriname’s half-million residents live along the coastline. Mangroves are being destroyed as people living inland migrate to coastal communities. Conservation International is helping fund Naipal and students’ land reclamation and mangrove recolonization efforts.

The living biomass created and carbon sequestration that results from building permeable coastal dams and dykes rivals that of tropical rain forests at 100-400 metric tons per hectare (2.47 acres). That provides a wealth of new habitat for wildlife, as well as sustainable nurseries required for sustainable fisheries and other ecosystem resources. It also supports practitioners’ efforts to ¨monetize” and help finance mangrove and similar coastal ecosystem restoration projects via the creation and sale of carbon offset credits.