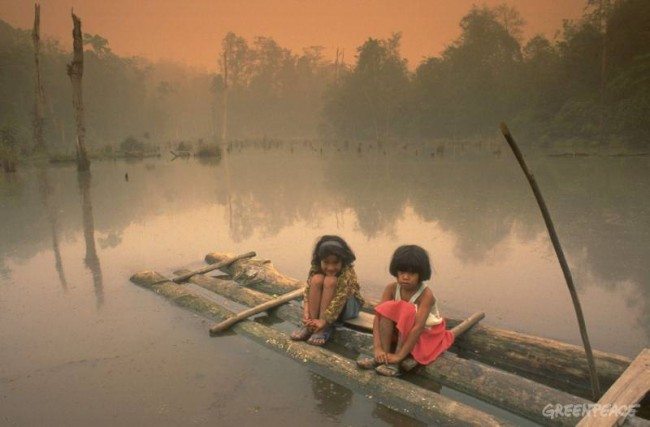 An inferno rages across some 5,000 km (3,100 mi.) in Indonesia, resulting in a human-caused ecological catastrophe that may well be of unprecedented scope and scale. The blaze releases more carbon dioxide into the atmosphere than the entire U.S. economy. In just three weeks, the Indonesian inferno has produced more CO2 emissions than Germany in a year, Charles P. Pierce reports for Esquire.

Massive, long-lasting tropical forest fires on peatland palm oil plantations in Malaysia and Indonesia have become a regular occurrence in recent decades as more and more natural forest cover has been slashed, burned, and converted for palm oil agriculture. While selling this palm oil on the global marketplace boosts GDP, creates jobs, and generates profits for the corporations and global investment groups that own them, it has disastrous effects from much broader and long-term perspectives.

Besides sending air pollution indexes off the charts and threatening human health, peatland palm oil fires are destroying forests and other critically needed natural and rural landscapes, waterways, and entire ecosystems that are home to many threatened and endangered wild species of flora and fauna, including the orangutan, gibbons, clouded leopards, Sumatran tigers, and sun bears. That’s not to mention uprooting thousands of people and ruining lives and livelihoods.

Changes associated with a warming climate – in levels and patterns of precipitation, as well as more days of extreme heat and rising mean temperatures – are increasing the likelihood of forest fires.

¨Why is this happening?¨ Pierce rhetorically asks. He explains that ¨Indonesia’s forests have been fragmented for decades by timber and farming companies. Canals have been cut through the peat to drain and dry it.

¨Plantation companies move in to destroy what remains of the forest to plant monocultures of pulpwood, timber and palm oil. The easiest way to clear the land is to torch it. Every year, this causes disasters.¨ 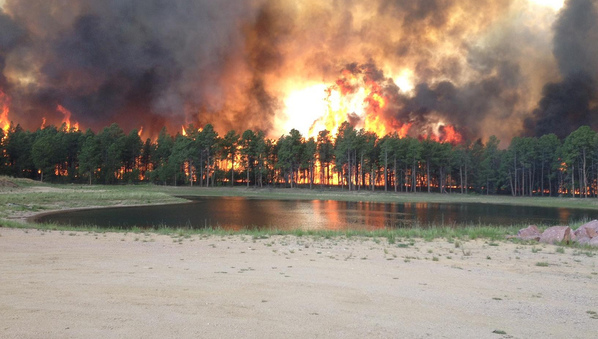 The actions of these corporate palm oil agriculture companies and their investors have been direct causal agents. Pierce points out that their ongoing activities increase the probability that these massive blazes will continue to occur. ¨Many of these fires directly result from the industrial manipulation of the landscape for plantation development.

¨Palm oil giants are accused of displacing local communities from their land and livelihood, opening up massive peat swamps with road building and forest clearance and installing extensive networks of canals. The lowering of the water table by peat canals dries out the land and allows fires to burn in areas where they would never naturally occur.¨

Environmental and other public interest groups have long been pressuring palm oil producers and the large multinational food products corporations that control much of the human food chain to stop cutting down existing forest lands and adopt sustainable practices.

While that has resulted in business codes of conduct instituted by organizations such as the Roundtable on Sustainable Palm Oil (RSPO), it’s clear that the damage already done is of a scope and scale that far surpasses the steps belatedly being taken.

The Indonesian inferno now blazing in Indonesia is a reminder of the excesses of irresponsible, unrestrained private enterprise and the unceasing calls and pressure on nations to participate in global markets such as those a variety of international leaders, such as Pope Francis, have been criticizing and urging leaders and people worldwide to change their ways.

If business executives and financiers are unwilling or unable to institute ethical and responsible business and investment practices, then it’s up to responsible government officials, environmental and public interest groups, and the public en masse to continue pressuring them until they do.