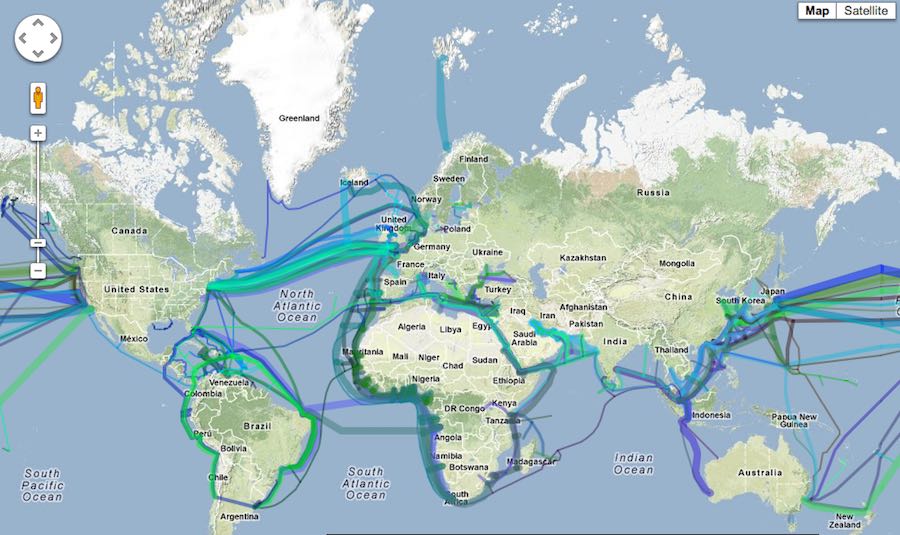 The globe-straddling network of submarine fiber optic cables that bring broadband Internet and voice communications to billions could easily be equipped with a variety of inexpensive sensors capable of providing scientists around the world with unprecedented amounts and types of immensely valuable data – information that could avert human catastrophes, according to a U.N. task force that includes researchers from the University of Hawaii (UH).

More than half-a-million miles of fiber-optic telecommunications cable span the ocean floor, connecting 2.7 billion people to the Internet and other communications networks that enable and facilitate global commerce, scientific research, geopolitics and political expression, Phys.org’s Talia Ogliore highlights in a Phys.org news report. At present, the research group points out, they are “deaf, dumb and blind to the external ocean environment.”

The research group advocates equipping new submarine fiber-optic cables with a variety of sensors that could provide a wealth of information for the wide range of scientists studying changes in ocean ecosystems and climate change, as well as those working to develop early warning systems.

“For an additional 5-10 percent of the total cost of any new cable system deployment, we could be saving lives from tsunamis and effectively monitoring global change,” Phys.org quoted UH M?noa’s Rhett Butler, Director of the Hawai’i Institute of Geophysics and Planetology.

Butler chairs an international committee tasked to evaluate the potential of tapping the unrealized scientific and societal value of integrating a variety of sensors and scientific instrumentation in submarine telecoms cables’ repeaters.

Better monitoring of tsunamis and earthquakes

Equipping new submarine fiber-optic telecoms cables’ optical repeaters with sensors and instrumentation to monitor environmental changes would be straightforward and cost relatively little, according to the joint task force’s report. The data and information obtained, on the other hand, could be invaluable.

Integrating scientific instruments capable of measuring ocean temperatures, pressures, salinity, the velocity of currents and other key environmental variables with submarine telecoms cables’ repeaters, “could answer many basic science needs, as well as help monitor the physical state of health of the cable system itself,” according to Ogliore’s news report.

For example, doing so “could enable the monitoring of the pressure of a tsunami as it passes over the ocean floor, allowing the measurement in real-time of the actual tsunami generated to assess its potential coastal threat and corroborate the necessity of a warning.”

The ability of scientists to monitor earthquakes and their potential impacts on human populations would also be greatly enhanced. The study authors point out that global earthquake monitoring is constrained by a dearth of ocean-floor seismic stations.

“A smarter undersea cable system could significantly improve the resolution at which researchers can describe the earthquake process itself – including how, where and how much the earthquake moves over its fault surface, details that are fundamental to understanding its tsunami-generating potential,” Ogliore writes.