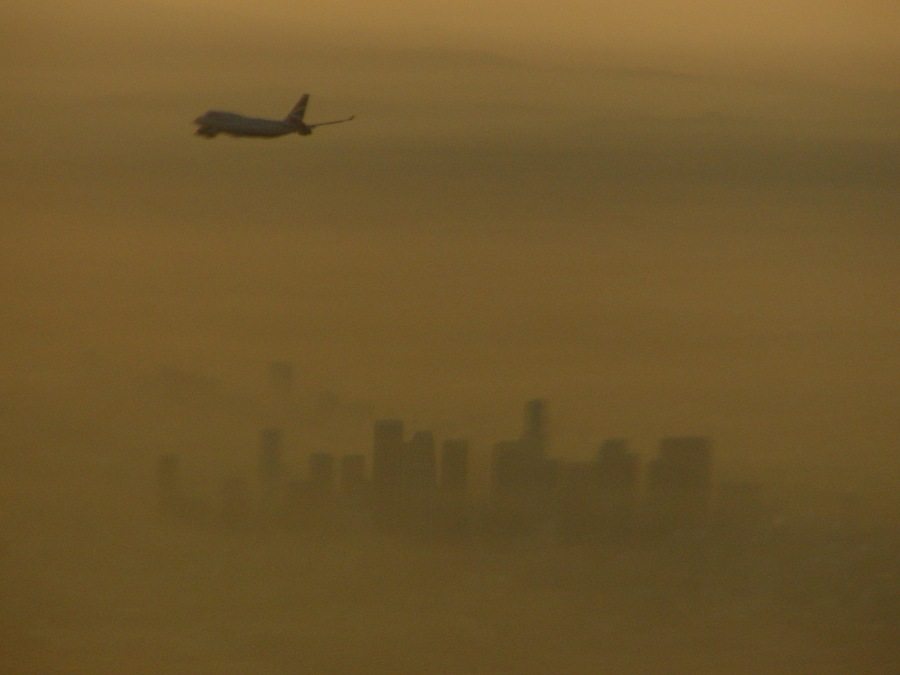 Dear EarthTalk: What are some of the more dangerous threats to our air quality and what can be done to eliminate them so we can all breathe more easily?                        — Melanie Smith, Pomfret, CT The main threats to local air quality across the United States (as well as most everywhere else) remain smog and particulate pollution, which combined or acting alone trigger millions of hospital visits and health complications for citizens every year. The American Lung Association (ALA) reports that almost half of all Americans live in counties where air pollution routinely reaches unhealthy levels and can therefore make people sick or exacerbate pre-existing health conditions.

The U.S. Environmental Protection Agency (EPA) points to mobile sources (trains, planes and automobiles) as the greatest contributor to American air pollution, but industrial sources such as power plants and factories are not far behind. Regardless of which kind of pipe pollution comes out of, the end result is consistently bad air quality in the nation’s 22 largest metropolitan areas and beyond.

“Ozone develops in the atmosphere from gases that come out of tailpipes, smokestacks and many other sources,” reports ALA. “When these gases come in contact with sunlight, they react and form ozone smog.”

Breathing in smog, while inevitable in certain urban and industrial areas, can irritate the cardiovascular system and cause other health problems. As for particulate pollution, it too comes from a wide range of both mobile and stationary sources.

“Burning fossil fuels in factories, power plants, steel mills, smelters, diesel- and gasoline-powered motor vehicles (cars and trucks) and equipment generates a large part of the raw material for fine particles,” explains ALA. “So does burning wood in residential fireplaces and wood stoves or burning agricultural fields or forests.”

Chronic exposure to particulate pollution has been linked not only to cardiovascular issues but also to cancers and reproductive problems—and has been shown to contribute to premature death.

Fortunately, the Clean Air Act has gone a long way toward cleaning up the air we breathe across the U.S., reducing key air pollutants overall by a whopping 68 percent since it first became law in 1970. A recent study by EPA researchers showed that, in 2010 alone, the Clean Air Act prevented more than 160,000 premature deaths, 130,000 cases of heart disease and 1.7 million asthma attacks, not to mention 86,000 hospital admissions and millions of respiratory illnesses.

But even though four decades of Clean Air Act programs have already done a lot to improve our health, environment leaders and public health advocates alike would like to see lawmakers put in place even more stringent rules to reduce pollution of all kinds and put our economy on a cleaner, greener path overall.

As for what you can do, ALA recommends protecting yourself and your family by checking air quality forecasts in your community and avoiding exercising or working outdoors when bad air quality is expected. Also, steps you can take to improve local air quality—driving less, using less electricity, turning the thermostat down, etc.—will have the positive side effect of helping mitigate global warming. Who knew that reducing your carbon footprint could actually also help you breathe more easily too?

One thought on “EarthTalk: Threats to Air Quality”