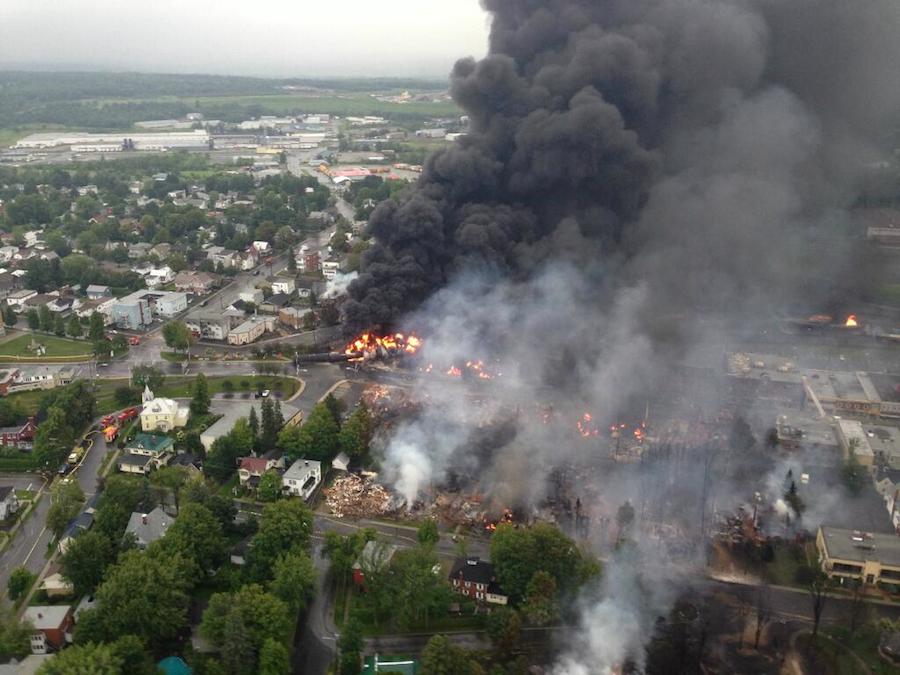 This week people from across North America and around the world are commemorating the one year anniversary of the Lac-Mégantic oil train disaster. There is growing concern about the dangers shipping oil by rail and increased public calls to reign-in oil trains.

The environmental and emotional legacy of the Lac-Mégantic disaster On July 6, 2013, a runaway train carrying crude oil derailed and exploded killing 47 people and destroying a large part of the little town of Lac-Mégantic. On the anniversary of the disaster, dignitaries joined the people of the town to mourn the tragic events.

In addition to widespread contamination, the explosion destroyed a number of buildings including the town’s waste water treatment plant. Far more serious are the impacts on the air, water and earth. Even more enduring are the emotional wounds that people will likely carry with them for the rest of their lives.

A week long event is now underway in support of the residents of Lac-Mégantic and their ongoing efforts to keep the oil trains out of their community. Between July 6, and Sunday July 13, 2014, people across the country and around the world are rallying in what is being called the Oil Train Week of Action. As part of this event non-violent protests against oil trains are being staged in communities all across the North American.

The tragedy of the Lac Megantic disaster and the spike of oil train derailments across North America last year are fueling growing concern. People are increasingly asking questions about the dangers of moving fossil fuels through their towns and cities. It is estimated that 25 million Americans live within the blast radius of oil trains. To see a map of oil train routes in the US and Canada click here.

More than any single event the tragedy in Lac-Mégantic has galvanized opposition to shipping oil by rail. A large number of people have vowed to make the disaster into a clarion call that ultimately reduces the number of oil trains in North America.

In the wake of Lac-Mégantic and dozens of other incidents, there is increasing pressure for more regulatory oversight, and higher standards that minimize the risks posed by oil trains. People are standing up to oil interests in an effort to protect themselves from the dangers of transporting fossil fuels by rail.

As explained in a Global Warming is Real article, we have a growing number of reasons to believe that the Keystone XL pipeline may never be completed. In the absence of a new pipeline, the fossil fuel industry is increasingly transporting oil by rail. This has dramatically increased the number of oil trains traversing North America.

The increased volume of oil train traffic is correlated with the growing number of rail incidence. Accidents are an inevitable corollary of transporting fossil fuels by rail. Seven out of the 10 worst US oil spills in the last decade happened in the last three years. It is an actuarial truism to say that this trend will continue. The more oil we ship by rail, the more disasters we are going to see.

Oil is involved in more rail and road accidents than any other dangerous goods. Between January 1, 2006 and June 30, 2013, almost one third of all accidents involving the transportation of dangerous goods by rail or road involved crude oil.
In 2013 alone there were 88 rail accidents involving oil and at least 8 explosions of trains bearing crude. More crude oil has spilled from train accidents in 2013 than in the previous four decades combined. Between 1975 and 2012, US rail spilled a combined 800,000 gallons of crude oil. In 2013 alone, a total of 1.15 million gallons of crude oil was spilled.

One of the ironic twists that has arisen from the spike in oil train accidents is increased support for oil pipelines. Although the average spills from trains tend to be larger than the average spills from pipelines, they are less frequent than those from trucks or pipelines. However, the biggest pipeline accidents dwarf the biggest train accidents. An Alberta spill in 1980 saw 6.5 million litres of crude spilled. The largest spill of crude oil from a train (between January 1, 2006 and June 30, 2013) was 90,000 litres on May 21, 2013.

Far from showing the need to expand oil pipelines, the Lac-Mégantic disaster tells us that we need to reduce the risks associated with transporting oil, by producing and consuming less of it. Moving fossil fuels is unsafe no matter how it is transported. The debate over whether we should build more pipelines, or ship more oil by rail is like choosing between death by hanging, or death by firing squad.

In a HAAS School of Business, online publication, Maximilian Auffhammer, a University of California Berkeley economist, estimates that if no new pipelines are built, up to ten billion barrels of tar sands oil will stay under ground.

There are a host of benefits associated with decreasing the amount of oil transported by rail. This will not only prevent deaths, injuries and environmental contamination from accidents, it will also reduce the amount of oil that makes it to market, which will in turn minimize emissions.

In the HAAS article, Auffhammer made the point that the limited transportation capacity of moving oil by rail represents a constraint that will slow extraction:

“Not building Keystone XL would make the rail capacity constraint binding and therefore lead to slower extraction even in the short run,” Auffhammer said.

The inherent capacity limits of rail will slow oil extraction and this could increase the price of oil thereby enhancing the relative value of renewable forms of energy. More renewable energy will further diminish our reliance on fossil fuels.

In the wake of an unprecedented spike in accidents, the US and Canadian governments have introduced or are considering new regulations to address the dangers of shipping oil by rail.

In the US, federal regulators have tightened some rules for oil shippers. On June 7, 2014, in the wake of an emergency order from the Department of Transportation, railroads now have to disclose the times and locations of oil trains to state emergency responders. Railroads that do not release information face a fine of $175,000 per day and even risk a ban.

In the summer of 2013, shortly after the Lac-Mégantic disaster, the Canadian government put emergency measures to reduce the risks associated with oil trains. Late in 2013, Canadian Transportation Minister Lisa Raitt announced that the federal government would begin to designate crude oil as highly dangerous. Transport Canada officially approved new safety rules drafted by the railway industry on December 26th, 2013.

Much of the regulatory discussion centers around the DOT-111 railcars that transport the oil. Industry figures suggest there are as many as 228,000 DOT-111 railcars currently in operation across the US. It has been known for at least a decade that the DOT-111 are subject to rupture. Ten years ago, the Transportation Safety Board of Canada wrote that the DOT-111 tank cars have a flawed design and a “high incidence of tank integrity failure” during accidents.

This spring, Canada’s transport minister announced new rail safety regulations which will eliminate or force a retrofit of the DOT-111 tanker cars. Tanker cars carrying oil now need a thicker, more puncture-resistant outer-shell jacket around the entire tank car, as well as thermal protection. They will also have to have extra-protective head shields on both ends. The estimated cost for replacing and retrofitting could exceed $1 billion.

The repercussions from the tragic explosion in Lac-Mégantic have reverberated around the world. With millions of people living within the blast radius of oil trains, we can no longer take our safety for granted even when we are in our homes.

We are unlikely to see an end of oil trains in our lifetime and we will never be able to erase the scars of the tragic disaster in Lac-Mégantic. However, we may be able to reduce the number of rail accidents and perhaps even keep some oil underground in the process.
——————-
Richard Matthews is a consultant, eco-entrepreneur, green investor and author of numerous articles on sustainable positioning, eco-economics and enviro-politics. He is the owner of The Green Market Oracle, a leading sustainable business site and one of the Web’s most comprehensive resources on the business of the environment. Find The Green Market on Facebook and follow The Green Market’s twitter feed. 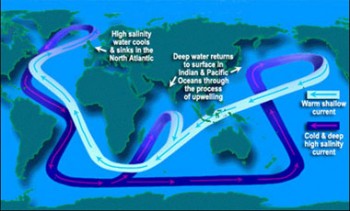