Despite all of the efforts being made to resist the construction of the Keystone XL, it will likely gain the approval of U.S. President Barack Obama. Supporting evidence for the notion that we will move ahead with the Keystone XL comes from the corporate sector. Powerful corporate interests have considerable resources that often enable them to ascertain the outcome of political decisions well ahead of the general public. Berkshire Hathaway has made a move that indicates that they believe the pipeline will be approved. Berkshire controls BNSF which is comprised of nearly 400 different railroad lines that merged or were acquired. Despite its rail holdings, since the end of 2013, Berkshire has been greedily buying shares of Phillips 66 Pipeline Flow Improver in a stock deal valued at about $1.4 billion.

The logic to move forward will be based primarily on nine major points:

First is the way the question was framed in the State Department’s most recent report. When faced with the choice between pipe and rail, the former is the better option from a total carbon emission point of view. Rail takes far more energy to move oil compared to a pipeline. Oil moved by rail increases greenhouse gas (GHG) emissions by 27.8 – 39 percent and if the oil is transported to the Gulf of Mexico, GHG emissions would rise to about 41.2 percent. What this assessment does not factor is the issue associated with the increasing exploitation of tar sands oil, which has a far worse emissions profile than conventional crude.

The second issue concerns safety and when presented with the false dichotomy between pipe and rail, the former is once again the better option. As explained by the Manhattan Institute, pipe is the safest way to move oil. While pipe is superior from an environmental safety point of view, this is another false choice, as moving oil by any means is not safe.

Third is the economic argument, moving oil through a pipeline is more cost effective than rail. The State Department has indicated that there will be as many as 42,100 (direct, indirect and induced) jobs from the construction of the Keystone XL pipeline. However, a number of independent analysis, including one from Cornell University, have refuted this number. The President himself has rebuffed the economic and jobs benefits of the Keystone XL and he stated that very few permanent jobs would be created. Some have even suggested that the pipeline will have a harmful economic impact due to increased fuel costs. In the final analysis, the costs of climate change will utterly eclipse any short term economic gain.

The fourth rational has to do with political considerations. The Keystone has been a fund raising bonanza for pro-oil Republicans and some Democrats, so this issue is at the forefront of their midterm campaign strategies. As we head into the 2014 midterms, denying the Keystone would be political suicide for many Democrats up for reelection. Despite the President’s go it alone strategy, there is only so much he can do with Executive Orders. He cannot afford to lose control of the Senate or lose ground in the House. However, there are times when a President must lead rather than succumb to the the short-sighted math of political equations.

A fifth reason is President Obama’s “all of the above” energy strategy which he reiterated in his most recent State of the Union address. The President has repeatedly stated that he seeks energy independence and the Keystone XL may be construed as a means of achieving this objective. Climate activists would prefer that he abandoned his all of the above strategy and adopt a “best of the above” approach.

The sixth reason is the demand for oil and heavy bituminous oil in particular. Heavy bituminous oil is critical for operations at U.S. refineries because light crude does not have the carbon content to make anything other than diesel and gasoline. Bituminous oil is used to make a far larger number of products. Currently, heavy oil is being shipped to the U.S. from Venezuela, but those reserves are expected to be depleted in the next five years. What this argument does not factor is that tar sands oil is far more environmentally destructive and demand needs to be curtailed rather than expanded.

A seventh reason arises from the claims that suggest if this oil is not used by the U.S. it will be shipped to China. The fact is that this is not accurate. The Canadian government has not been able to gain approval for the Northern Gateway pipeline which would ferry the bitumen to the west coast for transport to China. Further, the U.S. should not be phased by investment groups invovled in Alberta’s tar sands as they are driven by profits that will be generated from shipping the oil to the U.S, not moving tar sands oil to China.

An eighth reason involves the fact that because oil is already being moved by pipelines across the country, one more will not make a difference, even if it traverses the Ogallala aquifer. Proponents of the Keystone point to the pipelines, gas stations and chemical plants that are already on top of the aquifer. What this assessment ignores is the vast number of massive oil spills that have occurred and the fact that pipelines inevitably spill oil. A pipeline as large and as dangerous as the Keystone XL represents an unacceptable level of risk. At a time when we should be scaling back fossil fuel pipelines, we should not build another simply because this is what we have done in the past.

A ninth factor and perhaps the most salient issue involves the fact that shutting down the Keystone XL would be a blow to the fossil fuel industry, the most powerful and lucrative industry on earth. The fact remains that we cannot be held hostage to an industry that threatens to destroy our civilization. If we are not be able to curb our consumption of petrochemicals, we will not be able to reduce our GHGs. The result will be runaway climate change. Simply put, we cannot afford to ramp up oil production, particularly oil as destructive as that which comes from the tar sands.

“Physics…takes the carbon dioxide we produce and translates it into heat, which means into melting ice and rising oceans and gathering storms. And unlike other problems, the less you do, the worse it gets.  Do nothing and you soon have a nightmare on your hands. With climate change, unless we act fairly soon in response to the timetable set by physics, there’s not much reason to act at all.”

McKibben concludes by saying that we cannot afford to wait for President to reign in the fossil fuel industry, “we’re not waiting for him. We can’t.”

While it may be tragically unfortunate, the Keystone will likely win the approval of the President, albeit for all the wrong reasons. Those who understand the environmentally perilous course of expanding Alberta’s tar sands know that the Keystone XL pipeline fails the President’s own climate test, which he outlined in his speech at Georgetown last year.

The large body of climate science clearly tells us that we cannot continue to burn fossil fuels, particularly not oil as destructive as that which comes from the tar sands. It would be far better to shut down the Keystone XL and allow the combination of government regulations and market forces to wean America off of fossil fuels. This could in turn drive massive investment in renewable energy which is both clean and abundant.
——————-
Richard Matthews is a consultant, eco-entrepreneur, green investor and author of numerous articles on sustainable positioning, eco-economics and enviro-politics. He is the owner of The Green Market Oracle, a leading sustainable business site and one of the Web’s most comprehensive resources on the business of the environment. Find The Green Market on Facebook and follow The Green Market’s twitter feed. 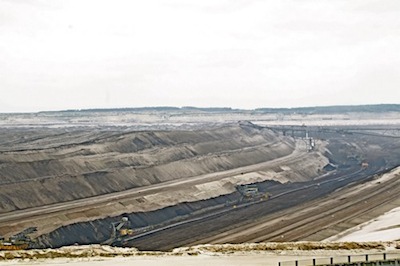