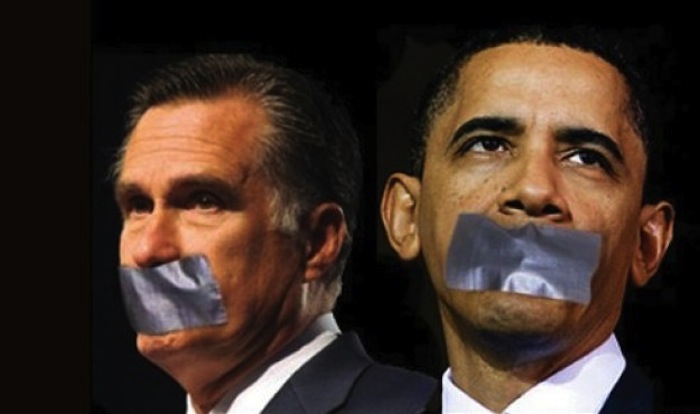 Despite weeks of cajoling and  demands to insert climate into the discussion during the presidential debates, the final debate ended on Monday with climate clearly absent for the 1st time in 24 years.

Both candidates have expressed a view that global warming is real, though Romney is reluctant to say (now that he’s running for president) that human activity plays any role in it, but as close as the two candidates could get to discussing the topic was their ongoing wrangling over energy policy. Even then the focus was largely on fossil fuel development including the explosion in natural gas development and in building the Keystone tar sands pipeline to carry the oil crushed from the Alberta tar sands, a process often described as an “oil spill in slow motion.”

Unique in the absence of a discussion about climate change for the third debate was its focus on foreign policy. As the United States becomes increasingly isolated in his position on climate change, America leaves the economy weakened as the international community–particularly China and Europe–aggressively develop new energy economy technologies and vulnerable in national security as rising tensions develop from resource scarcity and climate catastrophe.

The focus on energy policy throughout debates was the domestic development of oil and gas. Romney all but vilifies renewable energy policy, Obama speaks of “clean coal” and “all of the above,” bragging of the natural gas boom under his administration and promise to open up more federal land for drilling. Obama does have a record of active support for renewable energy but is often put on the defensive with the GOP’s mantra of “Solyndra.” Romney’s outrageous and totally false claim that 50 percent of the governments loan guarantees for renewable energy projects defaulted went mysteriously unchallenged by Obama in the first debate.

Even as recently as the last presidential campaign John McCain, the Republican candidate, touted his almost singular efforts, in partnership with Joe Lieberman, to pass climate change legislation in Congress.

The inability for leaders from both sides of the aisle to deal effectively and intelligently with climate change is only reflected in the current presidential campaign. Many may wish the issue would go away. For years, climate deniers have claimed the “last dying gasp” of the “alarmist” climate movement is at hand. And yet the signs continue to be ever-clearer that climate change is upon us. The opportunity to do something about it, to forge a sustainable future, to grasp the economic opportunity of clean and renewable power, is now. Not in another four more years – or more.

Frankly, I do not expect that much from our national leaders in dealing with climate change. In many ways climate change requires a bottom-up, grassroots energy to force leadership at higher levels. But it is inexcusable that the two men vying for the Top Job to lead this nation for the next four years are unable to even mention climate change. That is an abdication of the leadership role they seek.

Image credit: Friends of the Earth