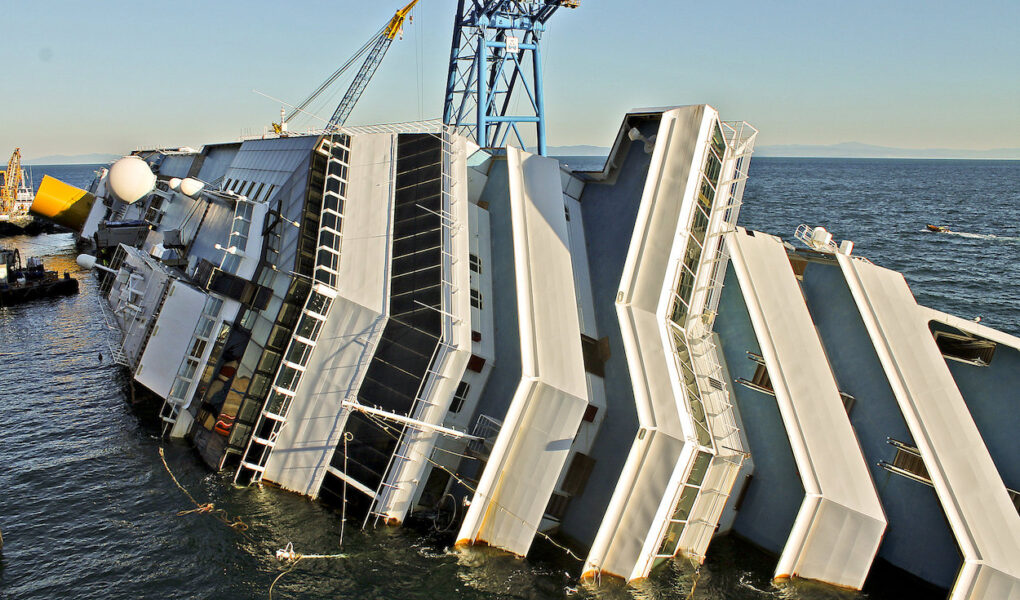 The recent sinking of the Costa Concordia underscores the destructive environmental impact of cruise liners. The ship went down on January 13 with 4,200 passengers and crew on board. Seventeen people are confirmed dead and 15 people are still missing. Even if they manage to stay afloat, these massive ships have enormous footprints.

If the Costa Concordia’s fuel leaks, it will wreak havoc on the marine environment, and the ship’s proximity to the coast means a spill could also be very damaging to local shorelines. An oil spill will destroy the livelihoods of many local fishermen who fish for cod, lobster, scampi, and swordfish.

A spill of the ship’s fuel could cause the most serious environmental disaster in Italy since the Amaco Milford Haven caught fire and sank in 1991. The Amaco contained 1 million barrels of crude oil and it contaminated the Mediterranean coast and shorelines for more than a decade.

The sinking of the Costa Concordia off Giglio Island imperils Europe’s largest marine park and threatens a huge variety of species. This park covers over 150,000 acres (60,000 hectares) of the sea. Its natural beauty is home to 700 species of flora and fauna, which includes wildlife like the critically endangered Mediterranean monk seal, the Audouin’s gull, and some rare frogs. Other life forms found in the local waters include whales, dolphins, turtles, sea horses, red coral, and Poseidon sea grass.

After declaring a state of emergency, Italy’s Environment Minister Corrado Clini indicated the environmental risk is “very high.” The minister warned that if the tanks break, the fuel will block sunlight vital for marine life on the seabed. The spilled oil would kill seagrass, destroying the marine ecosystem. The grass produces oxygen and is a refuge for organisms to reproduce or hide from predators.

Areas at risk include the Laguna di Orbetello bird reserve and the Natural Park of Maremma. This park is the only Italian habitat for dune-dwelling plants; it is also a stopover point for migratory birds and home to reintroduced osprey.

The Costa Concordia is full of environmentally harmful substances. The ship contains a total of a half-million gallons or 2400 tons of heavy fuel oil (bunker fuel), 200 tons of diesel oil, and other environmentally hazardous materials like lubricants, cleaning products, and chlorine. The fuel from the 950-foot-long ship contains toxic compounds, which could prove lethal to animals that ingest them or harm their ability to reproduce. The fuels can also coat animals, suffocating them and inducing hypothermia.

A slick has already started forming (most likely from engine parts) and there is concern that the ship may slide off the rock shelf it is on and sink into deeper water before salvage teams can recover the fuel. There is also a risk that if buffeted by high seas, the ship could break up like the Rena, the container ship that broke up off the coast of New Zealand’s Astrolabe Reef in October.

If everything goes as planned, it will take 2 to 4 weeks to remove the fuel and 7 to 10 months to remove the ship’s wreckage. However, bad weather has already delayed salvage efforts. To recover the fuel, divers will drill holes in the ship’s hull in a procedure known as “hot tapping.”

Even if the fuel is contained and salvaged, environmentalists warn that the 114,000-ton hull resting on the sea floor has already damaged a variety of marine life, including endangered sea sponges, crustaceans, and mollusks. The local corals at risk are already suffering due to warming waters induced by climate change.

Some members of the Italian government have joined environmental groups in asking whether such large ships should be allowed to go near protected areas. Others are questioning the environmental viability of cruise liners altogether.

Large ocean-going passenger vessels are responsible for staggering amounts of pollution, including three times the CO2 of airplanes. The massive footprints of luxury cruise liners have led some to describe them as a floating environmental disaster.

According to EPA statistics, each day, cruise ships discharge an average of 21,000 gallons of sewage (which includes fecal matter and heavy metals); 170,000 gallons of greywater; 6,400 gallons of oily bilge water; one ton of waste (including batteries, fluorescent lights, medical wastes and expired chemicals); and 8,500 bottles.

Perhaps the worst thing about cruise ships is the fact that they use thousands of tons of bunker fuel for each voyage. Bunker fuel is the worst type of petroleum known to man. It is a thick tar-like substance that produces airborne chemicals, including sulfur oxide, which have been linked with acid rain, asthma, and lung infections.

According to research conducted in 2009 by James Corbett of the University of Delaware, 64,000 residents of port cities die every year due to bunker fuel-related ailments. Corbett predicted that in 2012, that number will rise to 87,000.

Alessandra Motola Molfino, president of Italy’s national conservation group, told Reuters, “These monstrous floating cities pollute the scenery with their very presence and the rivers, seas, and cities where they stop with the refuse that they produce. The disaster of the Costa Concordia, unfortunately, proves the insubstantiality of the type of tourism that exploits and tramples on Italy’s beauty and cultural heritage and does not produce any growth or wellbeing.”

With 16 million passengers in 2011, the cruise ship industry is a significant source of GHGs and other pollutants. It is unconscionable that they are largely unregulated in the open ocean.

More regulations and more stringent laws are long overdue. We need legislation to protect the environment from cruise ships. The International Maritime Organization could start by regulating and restricting the use of bunker fuel.

Richard Matthews is a consultant, eco-entrepreneur, green investor, and author of numerous articles on sustainable positioning, eco-economics and enviro-politics. He is the owner of THE GREEN MARKET, a leading sustainable business blog and one of the Web’s most comprehensive resources on the business of the environment. Find The Green Market on Facebook and follow The Green Market’s twitter feed.