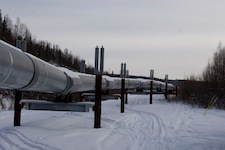 The State Department will delay until after the 2012 election the decision on whether to allow the controversial Keystone XL pipeline intended to route oil produced from the Alberta Tar Sands south to refineries in Texas. A decision on the pipeline had been expected by the end of the year.

Until recently the general assumption was that the Keystone pipeline project would be permitted. In October of 2010 Secretary of State Hillary Clinton said she was “inclined to approve it” because Canada is a better source of oil than the Middle East. But mounting opposition to the project in recent weeks and months has forced the administration to think twice. The dissent has not only come from environmentalist groups, but also from states directly affected by the proposed pipeline. GOP-leaning Nebraska has expressed concern over the route the pipeline will take, much of it over the vast Ogallala Aquifer extending across the Great Plains.

The unfolding scenario has put the Obama administration in a political squeeze between exploiting more “friendly” sources of oil and the environmental consequences of oil produced from tar sands, which is often characterized as a “slow motion oil spill.”

Despite the tough political situation and mounting pressure from all sides for a decision on the Keystone XL pipeline project, the administration insists the delay is not for political reasons, but to consider possible alternative routing and to further assess the full consequences of the project.

Portions of the pipeline already built have produced at least 12 oil spills already, including one “six story geyser” that dumped  21,000 gallons of oil in North Dakota.