Tomorrow the National Oceanic and Atmospheric Administration (NOAA) will incorporate new baseline data reflecting new climate “normals” for 1981-2010. For the past decade baseline normals spanned the period from 1971-2000.

These normals “serve as a 30 year baseline average of important climate variables that are used to understand average climate conditions at any location and serve as a consistent point of reference,” said the NOAA in a press release this week. Based on updated data encompassing the past decade (and leaving the 70’s behind), temperatures in the US are, on average, 0.5 degrees Fahrenheit warmer in the new baseline normal than the previous.

That’s to be expected given the warming of the past decade, says National Climatic Data Center director Thomas Karl: “The climate of the 2000s is about 1.5 degree F warmer than the 1970s, so we would expect the updated 30-year normals to be warmer.”

In every state the annual average maximum and minimum temperature has increased within the contiguous US, according to NOAA data. Warming has increased in all seasons, but winter months have seen much more rapid increase in temperatures than summer months (see image below).

State of the Climate 2010
Earlier this week NOAA released it’s annual State of the Climate Report for 2010. The report is compiled by nearly 370 scientists from 45 nations and shows 2010 as one of the two warmest years on record. Not all of the extreme weather events of 2010 are indicators of the larger climactic trend, but as a summary report from NOAA explains:

“In the background of many unique events, long-term trends are visible in the data; despite snow and cold in some locations, tens of thousands of observations around the world combine to reveal a 2010 average global surface temperature among the two warmest years on record.”

Among the climate indicators noted in the report: 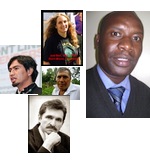 One thought on “New Climate “Normals” Begin on July 1st – Warmer is the New Norm : NOAA Releases 2010 State of the Climate Report”