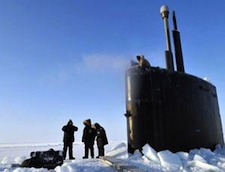 A study released earlier this month by the National Research Council (NRC) says that even the most moderate trends in climate change present significant challenges to the Navy, Marine Corps, and Coast Guard in the coming years and decades.

The report report was commissioned in 2008 by Admiral Gary Roughead, Chief of Naval Operations, to provide the Navy and other military units clear, non-politicized analysis of the risks to national and global security from climate change.

The study recognizes that the magnitude and timing of climate change and its impacts are not fully understood. Based on those uncertainties, the report advises Naval leadership to “adopt a risk analysis approach for dealing with climate change.”

Though many in Congress and the media tout uncertainties or “unsettled science” as a reason to draw attention away from climate change, both this report and general principals of risk analysis maintain the opposite. Another recent study by Sandia National Laboratories emphasized this point as it relates to the wider U.S. population. George Backus summed up the report in ScienceProgress:

While the Sandia Labs report looks at economic risk and the NRC at operational and national security risk, they both point to principals of risk analysis as an ideal basis for planning for climate change.

“This report represents the most detailed and analytical look at the impact of climate change on naval forces to date,” said Rear Admiral David Titley, referring to the NRC study. “It provides superb guidance for long-term strategic planning and investment considerations.” Admiral Titley is the Navy’s senior oceanographer and director of Task Force Climate Change. Look first to the Arctic

A primary recommendation of the NRC report is for the Navy to continue its strong advocacy for Congressional ratification of the United Nations Convention on the Law of the Sea. Even though the U.S. helped draft the treaty and signed the Agreement on Implementation in 1994, Congress has yet to ratify it.

The Law of the Sea Treaty is important due to opening of Arctic waterways as sea ice continues its decline in the region. As nations vie for resources, minerals and operational access to northern international waters, territorial conflict and challenges are expected to arise as an early consequence of climate change.

“[the report] identifies the Arctic as a place where recent climate change may have the most immediate and obvious implications for maritime operations,” said Bob Freeman of the Office of the Oceanographer of the Navy Public Affairs.

Technical challenges are also at issue as the Arctic warms. The report recommends increased research and development to address technical and operational shortfalls to “increase priority for extending modern navigation, communications, and charting coverage to include the Arctic region.”

Other recommendations from the report include preparations for increased disaster response and humanitarian missions from climate related impacts on the most vulnerable nations. Among these increased stresses are “more severe or frequent droughts, floods, storms, and other events with negative consequences for food and water supplies, possibly leading to even greater stress on the expanded human population.”

No single nation can be expected to fully respond to these impacts, so the NRC study advises working to enhance and improve key partnerships with “long-standing allies and non-traditional partners alike.” The report also recommends strengthening the NATO alliance.

Sea level rise is obviously a concern for the Navy (and for everyone else), and the report urges Navy leadership to diligently assess the risks of rising seas to Naval facilities and consider vulnerabilities from sea level rise to newly planned or renovated infrastructure.

The NRC study also calls for increased investment in research and development focusing on a global ocean observing network. Also important is the development of climate models that incorporate data from land, ocean, atmosphere, and ice. Such models will provide the most reliable data and help make climate change risk assessment and planning as reliable as possible.

“It’s all about being ready in tomorrow’s world,” summarized Admiral Titley.

We are living more in that world every day, and the authors of the NRC report praised the Navy Task Force on Climate Change and Task Force Energy for its strong leadership. “Both task forces are well positioned in capability and credibility to continue their strong contributions.”