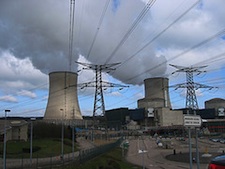 The Weekly Mulch from the Media Consorium
by Sarah Laskow, Media Consortium blogger
(reposted with permission)

Faced with the nuclear crisis in Japan, governments around the world are confronting the vulnerabilities of their nuclear energy programs. And while some European countries, such as Germany and France, are already considering more stringent safety measures–or backing off of nuclear development altogether–in the United States, the Obama administration is pushing forward with plans for increased nuclear energy production.

Ultimately, these questions are the same that the country faced after last summer’s Gulf Coast oil spill. As we search for more and more clever ways to fill our energy needs, can we write off the risk of disaster? Or are these large-scale catastrophes so inevitable that the only option is to stop pursuing the policies that lead to them?

The risks of nuclear

As Inter Press Service’s Andrea Lund reports, anti-nuclear groups are using the Japanese disaster as just one example of the disadvantages of nuclear power. Linda Gunter, of the group Beyond Nuclear, told Lund:

Even if you get away from the safety issue, which is obviously front and centre right now because of what’s happening in Japan, and you look at solutions to climate change, then nuclear energy takes way too long to build, reactors take years to come online, they’re wildly expensive. Most of the burden of the cost will fall on the U.S. taxpayer in this country, so why go there?…The possibility of it going radically wrong, the outcome is so awful that morally you can’t justify it. The reliability of nuclear power is practically zero in an emergency when you have this confluence of natural disasters.

And, as Maureen Nandini Mitra writes at Earth Island Journal, there are plenty of nuclear plants that are at risk. “More than 100 of the world’s reactors are already sited in areas of high seismic activity,” she reports. “And what’s happening in Japan makes one thing clear – we have absolutely no idea if any of these plants are actually capable of withstanding unprecedented natural disasters.”

The irony of nuclear energy is that the world started relying on it in part to mitigate the perceived threat of nuclear weapons. Jonathan Schell writes in The Nation about nuclear power’s transition from warheads to reactors:

A key turning point was President Dwight Eisenhower’s Atoms for Peace proposal in 1953, which required nuclear-armed nations to sell nuclear power technology to other nations in exchange for following certain nonproliferation rules. This bargain is now enshrined in the Nuclear Nonproliferation Treaty, which promotes nuclear power even as it discourages nuclear weapons….

Eisenhower needed some proposal to temper his growing reputation as a reckless nuclear hawk. Atoms for Peace met this need. The solution to nuclear danger, he said, was “to take this weapon out of the hands of the soldiers” and put it “into the hands of those who will know how to strip its military casing and adapt it to the arts of peace”—chiefly, those who would use it to build nuclear power plants.

While the threat of nuclear war still looms, since World War II, the nuclear materials that have caused the most damage have been those in the energy industry. And, as Schell reminds us, soldiers still have nuclear weapons in hand, as well.

The Obama administration has always been gung-ho about nuclear energy: The president is from Illinois, after all, where Exelon Corp., one of the countries’ biggest nuclear providers, is based. Even in the face of Japan’s disaster, the administration is not backing off of its push for nuclear, as Kate Sheppard reports at Mother Jones:

Nuclear power is part of the “clean energy standard” that Obama outlined in his State of the Union speech in January. And in the 2011 budget, the administration called for a three-fold increase in federal loan guarantees for new nuclear power plants, from the $18.5 billion that Congress has already approved to $54.5 billion. “We are aggressively pursuing nuclear energy,” said Energy Secretary Steven Chu in February 2010 as he unveiled the budget….In Monday’s White House press briefing, press secretary Jay Carney said that nuclear energy “remains a part of the president’s overall energy plan.”

The state of safety in the U.S. nuclear industry isn’t particularly reassuring, though. As Arnie Gunderson told Democracy Now!‘s Amy Goodman, almost a quarter of American nuclear plants rely on the same design as the one currently faltering in Japan. Even worse, experts have known for decades that the design of this reactor is not safe. Gunderson explained:

This reactor design, this containment design, has been questioned since 1972. The NRC in 1972 said we never should have licensed this containment. And in 1985, the NRC said they thought it was about a 90 percent chance that in a severe accident this containment would fail. So, that we’re seeing it at Fukushima is an indication that this is a weak link. It’s this Mark I, General Electric Mark I, containment. And we have—essentially one-quarter of all of the nuclear reactors in the United States, 23 out of 104, are of this identical design.

It’d be reassuring if the U.S. government could promise that our superior safety standards would overcome these dangers. But, as Mother Jones‘ Sheppard writes, the day before the earthquake in Japan, the Nuclear Regulatory Commission extended the life a Vermont plant using this very design, over the objections of the state’s legislature.

Whatever the attractions of nuclear energy, it’s a dangerous business. The Nation‘s Schell puts it best when he argues that the fallibility of humankind is the biggest risk factor. He writes:

The problem is not that another backup generator is needed, or that the safety rules aren’t tight enough, or that the pit for the nuclear waste is in the wrong geological location, or that controls on proliferation are lax. It is that a stumbling, imperfect, probably imperfectable creature like ourselves is unfit to wield the stellar fire released by the split or fused atom.