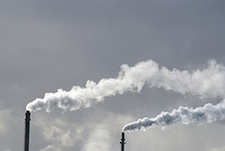 A research paper called Evidence for super-exponentially accelerating atmospheric carbon dioxide growth (pdf) recently published  in the Cornell University Library shows – in great mathematical detail – that atmospheric carbon is increasing “super exponentially” and that human civilization currently consumes planetary resources at the rate of 1.5 earths every year. “This means,” says the report in its introduction, “it now takes the Earth one year and six months to regenerate what we use in a year.”

Regarding the cause and consequence of climate change, “we do not enter this debate” say authors A.D. Hüsler and D. Sornette of the Department of Management, Technology and Economics in Switzerland.

We focus here on the undisputed fact that, due to the massive use of fossil energies, the world economy emits, among many other products, large amounts of carbon dioxide into the atmosphere.

The paper is dry and full of calculations and formuli, but its conclusions are clear:

Overall, the evidence presented here does not augur well for the future.

“Evidence-based decision making” – something that seems utterly absent in Washington. An editorial published today in Nature entitled Into Ignorance eloquently makes the case:

It is hard to escape the conclusion that the US Congress has entered the intellectual wilderness, a sad state of affairs in a country that has led the world in many scientific arenas for so long. Global warming is a thorny problem, and disagreement about how to deal with it is understandable. It is not always clear how to interpret data or address legitimate questions. Nor is the scientific process, or any given scientist, perfect. But to deny that there is reason to be concerned, given the decades of work by countless scientists, is irresponsible. 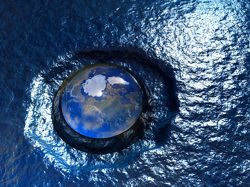