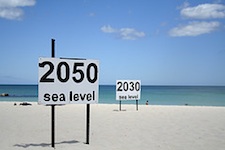 A new study to be published this month in the journal Geophysical Research Letters has found that the Greenland and Antarctic ice sheets are losing mass at an accelerating rate. The rapidly accelerating ice melt from the ice sheets is happening much sooner the models have predicted. According to the research, the ice sheets are now overtaking the ice loss from mountain glaciers and ice caps and will likely become the dominant source of global sea level rise.

That the ice sheets will eventually become the largest contributor is “not surprising,” says the report’s lead author Eric Tignot of the NASA Jet Propulsion Laboratory and UC Irvine. “They hold a lot more ice than mountain glaciers,” he said. “What is surprising is this increased contribution is already happening. If present trends continue, sea level is likely to be significantly higher than levels projected by the United Nations Intergovernmental Panel on Climate Change in 2007.

Using two separate techniques to measure ice melt, each confirming the others data set, the 18-year-study showed that the Greenland and Antarctic ice sheets combined lost 36 gigatons more each year on average than the year prior. To try to wrap our heads around these numbers, one gigaton equals one billion metric tons, or more than 2.2 trillion pounds. The ice sheets lost an average of 475 gigatons of mass each year, according to the study.

Given a continuation of the rate of ice melt over the next four decades, the Greenland and Antarctic ice sheets could raise sea levels six inches by 2050. When combined with thermal expansion, melting glaciers and glacial ice caps, total sea level rise could be as much as one foot or more by mid-century.

The authors caution that their research, while their research is an important indication of potential sea level rise, “considerable uncertainties remain in estimating future ice loss acceleration.”

Co-author Isabella Velicogna of the California Institute of Technology and NASA’s Jet Propulsion Laboratory, says the most important aspect of the research is the realization of the quickening pace of sea level rise. “The point is,” she says, “it’s happening and we can’t deny it. Eventually it’s going to have an impact.”

And it may be much sooner than expected.