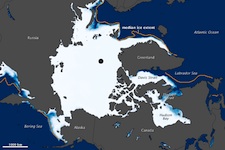 With North America gripped in extreme cold and harsh winter weather, the opposite scenario has played out in the Arctic.  According to the National Snow and Ice Data Center (NSIDC) and NASA Earth Observatory, Arctic sea ice extent hit the lowest ever recorded for the month of January. February tied with 2005 for lowest sea ice extent recorded for that month.

Hudson Bay, Hudson Strait, and Davis Strait are typically frozen over by mid-November says the NSIDC, but did not freeze over completely until mid-January. NSIDC considers two possibilities as principal causes for the anomalous conditions.

One possible factor is known as the “Arctic Oscillation” (AO), a phenomenon of shifting patterns of high and low atmospheric pressure. A positive AO puts high pressure over mid-latitudes and low pressure over the high latitude Arctic, creating wind patterns that trap cold air in the far North. With negative AO, mid-latitude pressure isn’t as high, and Arctic pressure isn’t as low, allowing cold air to move south, and warm air to move north. Such negative Arctic Oscillation was the case for last December and January.

The other factor could be a condition of positive feedback from larger areas of open ocean in the Arctic still releasing heat into the atmosphere. Sea ice has reflects more light and heat back into space. Darker ocean waters not covered with sea ice absorbs heat typically reflected into space and reinforces melting, the NSCID says.