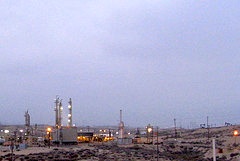 During the State of the Union address earlier this week, President Barack Obama spoke at length about clean energy, with nary a mention of climate change. This is the new environment in which America’s energy policy is being made.

Just two years ago, Democrats were rallying to combat climate change, one of the most worrying challenges the country faces. But now, Obama has apparently given up his plan to openly fight climate change during his presidency. It’s hard to imagine how, even in a second term, he would choose to re-fight the lost battle to create a cap-and-trade system.

The Obama Administration has instead resorted to a sort of insurgent strategy. Instead of waging an all-out battle against energy interests, the U.S. government will try to chip away at the edges of the industry’s power and rally citizens’ allegiances to a new flag, that of “clean energy.”

Since Washington hasn’t succeeded at tackling climate change head on, Obama’s new strategy is to attack the problem obliquely by promoting innovation in clean energy and setting goals for the use of technologies like electric cars. But can clean energy efforts and innovations thrive in the absence of a wholesale climate policy? When a climate bill was still a possibility, clean energy entrepreneurs were promising substantial investments in the sector, if only Co ngress could give them a framework. And as Monica Potts explains at The American Prospect, in the absence of a climate bill, clean energy has flagged:

“What’s been problematic about the president’s approach up to now is that, despite his efforts to pump funding into the clean-energy sector, as he did with about $90 billion of the stimulus, renewable energy hasn’t taken off. Obama had a line in his speech that summed up why this is so: “Now, clean-energy breakthroughs will only translate into clean-energy jobs if businesses know there will be a market for what they’re selling.”

It’s possible that clean energy investors will take the President’s new promise as incentive enough to push forward. But, they will also have to consider the influence of the newly empowered Republicans. Mother Jones‘ Kate Sheppard isn’t convinced that the president’s new tactic will stick:

“There are plenty of people—and most of them happen to be Republicans—who don’t think that policies to support clean energy are worthwhile and who will oppose any attempt to move away from them,” she wrote. “Meanwhile, this latest iteration of the Obama climate and energy plan includes few of the driving forces that would actually make renewables cost-competitive in the near future and allow renewables to compete (the big one being, of course, a price on carbon pollution).”

Another weak point in the President’s new strategy is his reliance on the vague idea of clean energy, which becomes dirtier the more it is used. As Sheppard writes, “Environmental groups weren’t all that excited about the inclusion of “clean coal” and nuclear in that mix, but that’s pretty broadly expected as the price one must pay to draw broader support for a clean energy standard.”

Another key source of clean energy is natural gas. In Washington, it’s become a given that natural gas, which releases less carbon when burned than coal or oil, will help the country transition away from its high-carbon diet and be phased out as energy sources like solar and wind become more viable. (The natural gas industry, of course, doesn’t see its role as transitional. It’s playing for keeps.)

And while some places are rightly celebrating the freedom that natural gas gives them from coal—as Care2’s Beth Buczynski reports, Penn State is investing $35 million to convert its coal-fired power plant to natural gas over the next three years—other places are bearing the environmental toll of this new, clean fuel. In North Carolina, for instance, hydrofracking, the controversial technique that natural gas companies have been using to extract the gas from shale, is not even legal, but already environmental groups are having to fight efforts from energy companies to buy up potentially gas-rich properties, Public News Service reports.

A poverty of political capital

The president’s new strategy on clean energy will surely succeed at turning current energy economy slowly towards a new path. In the absence of any overarching strategy to fix the country’s energy problems, it’s going to have to be good enough. But ultimately, this sort of tactic, born out of a poverty of political capital, cannot move fast enough to keep energy companies from scouring the earth for more profits doing what they’ve been doing.

That means that there will be more scenes like the one in Kern County, California, where companies are dredging up the last resources of oils from the tar sands. In Orion Magazine, Jeremy Miller writes:

“The land also reveals the Frankensteinian scars and machinery necessary to keep up that level of production. Gas flares glow on hillsides. Nodding donkeys lever over thousands of wells, some of which are spaced fewer than a hundred feet apart. Between the wells and imposing cogeneration power plants—which supply energy and steam to the senescent fields—run wild tangles of pipe. These are the conduits of an elaborate industrial life-support system, breathing in steam and carrying away oil.”

Will the president’s new strategy prevent the creation of more landscapes like this one? It seems overly optimistic to hope so.