The green market is vulnerable to the formation of a bubble. The rapid growth of the green market could be seriously undermined by the implosion of such a bubble. Those who care about the environment have a vested interest in protecting the green market from bubbles. The Securities and Exchange Commission’s (SEC) civil lawsuit against Goldman-Sachs suggests they are serious about addressing securities fraud.These charges send a powerful message to those who manipulate markets.

Market manipulation describes a deliberate attempt to interfere with the free and fair operation of the market and create artificial, false or misleading appearances. Market manipulation is prohibited in the United States under Section 9. The Act defines market manipulation as transactions which create an artificial price or maintain an artificial price for a tradable security.
Although the SEC may not have the legal teeth to exact punishments through the courts, they have exacted their pound of flesh against Wall Street just by pressing charges against Goldman-Sachs. After the initial disclosure of the lawsuit, shares of Goldman Sachs plunged 13%, even though they reported earnings of $3.46 billion in the first quarter of 2010.

The repercussions of the SEC charges reverberated throughout the markets and the major indices tumbled. Broader stock indicators also took a hit, the Dow Jones Industrial shed hundreds of points, and on the NYSE, five stocks fell for every one that rose. Positive new consumer sentiment, better housing starts and strong quarterly results from companies such as Google, Bank of America, and General Electric could not keep the markets from going south.

Goldman Sachs was amongst those hardest hit by the SEC’s charges, but many in the financial sector immediately began to bleed as the news about the criminal investigation broke. While the general population vilifies derivative traders, they ignore the real culprits. Rather than focus on derivative trading, we need to erect safeguards against those who would artificially inflate (or pop) a bubble purely for speculative gain.

Although it may be popular to suggest that it is “morally reprehensible” for a firm like Goldman Sachs or Morgan Stanley to “bet on both sides,” it is also an uninformed view. Derivatives may have been the focus of public ire, but they are a form of hedging that is sewn into the fabric of the financial system. Derivatives are actually an important means of mitigating against risk.

Although derivatives are not the evil financial instrument they are made out to be, as the recession of 2008 illustrates, overselling them can get us into serious trouble. Free markets may be a marvellous thing, but regulations are absolutely necessary to help us avert financial catastrophes. Although we clearly need greater regulation, most cannot understand the financial system well enough to know which regulatory approach works best.

With the aim of shedding light on financial regulation, well known investor George Soros offered his assessment of the recession of 2008. In an essay written on Oct. 25, 2009, Soros indicated that there is an urgent need for financial reform. In the essay, he explains:

Instead of a tendency towards equilibrium, financial markets have a tendency to develop bubbles. Bubbles are not irrational: it pays to join the crowd, at least for a while. So regulators cannot count on the market to correct its excesses.” This is why, according to Soros, “financial authorities must accept responsibility for preventing bubbles from growing too big.”

While government stimulus staved off economic disaster, too much stimulus can inflate bubbles. With all of the government money being poured into the green market, we need to be vigilant. However, even more dangerous is the kind of regulation that is a drag on the economy and inhibits the growth of green without reducing the incidence of bubbles.

Transparency can go a long way, but if we are to achieve meaningful financial reforms that limit the cataclysmic effects of systemic shocks, we must work to prevent the wilful manipulation of the markets for financial gain.

Despite some last minute amendments to the Financial Regulation Bill now before the Senate, it will likely be approved. Even without new legislation, we have already seen that government agencies are capable of delivering punishing blows. Wall Street should take heed, even if the SEC cannot win in a court of law, they can have a major impact on stock valuations.

While Goldman Sachs may not be found guilty, their reputational capital has been compromised and this is something that no investment bank can afford. The wider implications may encourage some would be market manipulators to reconsider. The SEC’s charges and the Financial Regulation Bill may also encourage Wall Street to cooperate with efforts to make the entire system safer.

Economic growth is essential to the war against climate change. Without economic growth, there will be insufficient investment in new energy sources and sustainability efforts. As Paul Hawken said, “Business is the only mechanism on the planet today powerful enough to produce the changes necessary to reverse global environmental and social degradation.”  We urgently need to find the delicate balance between unfettered economic growth and appropriate regulation.
—————–—————–—————–—————– 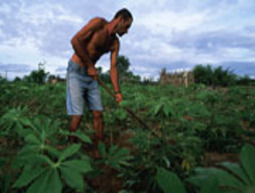