It is almost 3 months after the Copenhagen Accord was hammered out by 28 of the world’s key countries that represent over 80% of the world’s global warming pollution and some of the most vulnerable to the impacts of climate change (as I discussed here).  Given the state of the Accord just after Copenhagen with some calling it a failure, some outlining the foundations in the Accord for international efforts (and as my colleague discussed here), and others…well not quite sure what to make of it, where do things stand on international efforts to address global warming?

If you just picked up the paper, watched TV, listened to the radio, or read blogs you might think that things aren’t really moving as there is very little coverage of international global warming discussions (especially compared to last year when every 5 seconds some news story or analysis emerged).  But that doesn’t mean that nothing is happening on the international front.  In fact, despite the lack of regular coverage, things are moving forward – albeit tentatively, behind the scenes, and without a big splash.  Here are four things that are occurring that are worth following.

Over 108 countries have “associated with” the Copenhagen Accord (as summarized here).* These countries account for over 80% of the emissions and 77% of the population of the world.  The last two major pieces fell into place when China and India formally “associated with the Accord” in the last 2 days (as my colleagues discussed here and as covered by the New York Times).  Basically these countries are saying: “we agree to international action on global warming and on the basis of the outlines agreed in the Accord”.  Of course many of these countries have urged for deeper action than outlined in the Accord, but by Associating with the Accord they are signaling that they want to proceed internationally to address global warming.

60 countries representing over 80% of the world’s emissions have formally recorded actions to reduce their global warming pollution (as I discussed here).  Many of these countries aren’t simply waiting for some future international meeting or for the final international agreement to implement specific policies and programs to reduce their pollution.  For example, as my colleagues have discussed, China and India have adopted new domestic policies since Copenhagen that will reduce their global warming pollution.  Brazil signed a bilateral agreement with the US (available here) and there are expectations that the US will sign another one with Indonesia when President Obama goes there March 20-22 (hopefully with concrete near term actions).

Key countries will begin to coordinate efforts to address deforestation emissions. Over 15% of the world’s global warming pollution comes from deforestation and forest degradation, so the Copenhagen Accord agreed: “on the need to provide positive incentives to such actions [that reduce deforestation and forest degradation]”.  Key countries including the US, Australia, Germany, and France agreed to contribute $3.5 billion over 3 years to “prompt start” efforts to reduce deforestation emissions.  It is critical to ensure that the flow of this early money goes to effective actions that reduce deforestation as every second a football field size of rainforest is lost (and it won’t return).  So instead of waiting for the next international negotiating session or greater clarity on how things proceed (and more loss of the tropical forests), a group of key developed countries and deforesting countries are meeting as we speak to begin efforts to better coordinate global efforts to combat deforestation.

High-level and influential set of policymakers will be discussing ways to generate sizeable funding to assist developing countries in deploying clean energy, reducing deforestation emissions, and adapting to the impacts of climate change.  UN Secretary General Ban Ki-moon has created a High-level Advisory Group on Climate Change Financing to be chaired by UK Prime Minister Gordon Brown and Ethiopian Prime Minister Meles Zenawi, with representatives including George Soros, Nick Stern, and Lawrence Summers.  The group is tentatively scheduled to meet March 29th and will provide an initial report to the May/June climate negotiating session and a final report to the climate meeting in Cancun, Mexico in December.  Let’s hope some politically possible and specific proposals emerge that can be adopted by key countries.

That is the positive momentum that has occurred post-Copenhagen.  But of course not everything is all good news. The World Bank is still funding things that are taking us in the wrong direction by proposing to finance a coal plant in South Africa that isn’t capturing its carbon (and doesn’t put in place a real plan to capture it’s carbon in the future), and is barely investing in renewables and doesn’t have a real energy efficiency investment as a part of this proposal. Indonesia is proposing to classify its palm forests as “forests” in order to access money that is supposed to be set aside for deforestation reduction efforts – not exactly the aim of that funding as it is supposed to support things that are slowing deforestation, not actions that deforested rainforests in the first place.  Critical actions by the US gained a little momentum when President Obama met with key Senators and made clear his support for a comprehensive climate and energy bill this year, but uncertainty about US action still clouds international prospects (let alone holding back the needed investments in job creation, energy independence, and clean energy technology leadership).

So there is some uncertainty about how things proceed. In many respects that is only natural as the Summit in Copenhagen wasn’t your normal climate negotiations and the process after the Summit was left unclear.  So the world spent a couple of months sorting out what was achieved, how the Copenhagen Accord was to proceed, and what are the next steps for the UN climate negotiations.  But while that “sorting” was occurring, things proceeded and countries moved forward with actions to reduce their emissions (with some hiccups along the way).

The expectations for the climate meeting in Cancun, Mexico this December appear to be focused not on agreeing to the final treaty (as the European Commission just outlined is likely), but rather to making concrete progress to implement the actions that countries committed to reduce their emissions, the finance that is to be deployed in the near- and medium-term, the rules for the “transparency” provisions agreed in the Accord, and the guidelines for efforts to solve the loss of tropical rainforests.  Those actions are critical and countries have made it clear that they want those things to proceed, even while they sort out exactly how things will progress this year.

Now is not the time to sit in a holding pattern and wait for exact clarity on how things proceed.  We must plug ahead and implement key actions that will put the world closer to solving this critical challenge.

* This includes countries that have formally sent letters to the UNFCCC signaling their desire to be “associated with the Accord” and those that have submitted emissions reduction actions but may not have not clarified in their submission that they want to be “associated”.  All values based upon data from the World Resources Institute Climate Analysis Indicator Tool.  Emissions from 2005 and include deforestation; population data from 2006. 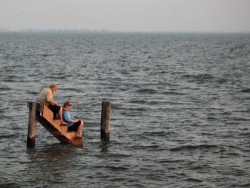