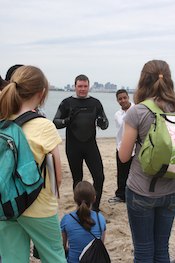 Chris Swain loves to swim. He’ll tell you he isn’t necessarily a great swimmer, certainly not the best. But that’s a distinction better left to others, as I am happiest strolling alongside the waves in any case, not diving into them. What is clearly understood, and central to his story, is that Swain loves to swim. From his early childhood Swain has loved the ocean and at peace in the water.

Swimming becomes a transcendent experience for a man who has swam the length of both the Columbia and Hudson Rivers (that’s just the short list). Such experiences His current project, what he calls his  Swim for a Healthier World, began last April on Earth Day in Marblehead, Massachusetts and will end, if all goes reasonably well, 1000 miles and nearly two years later stroking up the Potomac River to Washington DC.

You may ask “Why?” and Swain will be glad you asked. I recently had the opportunity to chat with Swain for an hour about his current adventure, his core motivation, and the philosophy that drives him.

Motivation resides in the heart
The reason Swain braves the freezing and dirty coastal waters of the Atlantic is ostensibly to help raise awareness about the fate of the oceans he loves, but it goes beyond simply a well-promoted swim to bring attention to yet another environmental problem, while even “just” at that it is an impressive feat. Swain has endured collisions with boats, 12-foot waves, encounters with lightning storms, industrial chemicals, nuclear waste, oil slicks, raw sewage, toxic blue-green algae, menacing sharks, and the list goes on. But the idea is not only to “raise awareness”, but to effect tangible change the can come from that awareness. After all, there is a lot at stake.

“Motivation resides in the heart,” Swain says, and what motivates Swain most is his two daughters and his connection to the natural world. Swain fears that the rich natural world in which he  grew up and learned to love will not be there for his children. His motivation is to connect with the next generation, those who are faced with bearing the brunt of a deteriorating environment, and to help them cope with the challenges they will inherit.

A very odd time
For all the good intentions of environmentalism, Swain believes it often lacks a core connection to people’s daily lives, or fails to address the natural human resistance to the enormous change it promotes. “The emotional practice of living in a healthy way” is lacking in the environmental movement, he says. Without a real connection and love for the living world, “we can’t expect anything to stick.”

“We live in a very odd time,” he says. “Everybody knows the problems we now face – and their solutions. Something not usually true in history.”  Swain breaks the challenges down to two basic themes: climate disruption and threats to the “web of life” or loss of biodiversity. And while we may know the solutions, addressing them requires core changes in how most people live their lives. Change like that brings fear and resistance.

Change means pushing through fear
It has been said often, but  Mark Twain perhaps said it best: “Courage is resistance to fear, mastery of fear – not absence of fear.”

Everyone has moments that exercise their “emotional muscle,” helping them push through a fearful time  in their lives. For Swain, the experience of swimming long distances in the open Atlantic has served as a daily exercise of that emotional muscle, and become for him a metaphor for our current time. “I have one or two freakouts every day,” says Swain of days he is in the water. “I will see a large shadow pass underneath me in the water”, or some other unforeseen situation will arise that naturally leads to “a response of anxiety.” When a menacing and mysterious shadow passes below, he rationalizes that it likely isn’t a shark, “97% of sharks are gone due to hunting,” and in any case, despite the support boat nearby, there is “nothing I can do anyway” – except to keep swimming. It is a daily experience of “freaking out,” feeling fear, mastering that feeling, and moving forward.

Swain’s experience in the water becomes ours as we live our daily lives and consider the kind of future we are leaving for our children. There are menacing shadows passing underneath, almost unseen, but we must move forward with the actions we know we must take to create the change we recognize is required for future generations. Changing the future: by and for our children
One of the most important aspects of Swain’s Swim for a Healthier World is connecting with children. By focusing on educating children he can better leverage his time and effort. “Anyone whose kid has learned about recycling in school knows how hard it becomes to just throw something recyclable away.” Daddy, you need to recycle that!

Swain works with college age students down to pre-kindergarten kids, but focuses mainly on elementary school-age children. “Information given to a kid is information leveraged,” says Swain. Children’s minds are still open, and his plan is to aim as much of his efforts as possible at kids and young adults to show what can be done to create a sustainable future – their future. Teaching kids about how they can understand the issues and helping them make the connection at a personal and emotional level not only prepares the child, it also move the adults in their lives toward change that “sticks,”  thus planting a seed for the future and pushing through to the first impulses of real change in the world today.

Ever forward
And so Swain continues on in his journey, slowly but surely paddling through the cold, dangerous Atlantic toward Washington, splitting his time between the water and any classroom that will allow him to give his message of concern and hope for a healthy ocean, a stable climate, and a vigorous and sustained web of life on planet earth.

Resources for educators
Educators are encouraged to arrange a presentationin their classroom. By the end of the 2010-1011 school year, and with help from individual sponsors from all over the world, Chris Swain will have visited with over 50,000 students, giving classroom presentations or leading a recycling or beach clean-up event. Educators can access information and request to have Chris come totheir school to share his mission and passion for a cleaner, healthier, sustainable future.