The shouting,  yelling, and display of firearms in the health care reform debate has pulled much of the spotlight off of work pending in the Senate to pass its version of the Waxman-Markey American Clean Energy and Security Act of 2009. Even so, when the heat isn’t on health care, it is on climate legislation, and resistance to progress remains strong.

To help ensure that progress is indeed made, a diverse collection of more than 60 groups ranging from environmental advocacy organizations, veterans associations, hunters and fishers, religious groups, and labor unions announced the formation of the Clean Energy Works coalition.

Clean Energy Works will launch an ambitious grass-roots campaign in 28 western, mid-western, and southern states. The on-the-ground campaign will be combined with lobbying efforts plus television, radio, and internet advertising to help “muscle through” climate legislation in the face of recalcitrant (and sometimes delusional) resistance from Republicans and lukewarm acceptance from coal-and-manufacturing-state Democrats.

The group hopes to appeal to America’s desire for more clean energy and “green” sector jobs (just more jobs, with the clean and green sector the clear avenue for growth), a cleaner environment, and a more secure nation, both economically and politically.

We send a billion dollars a day overseas to pay for our oil,” said David Di Martino, communications director for Clean Energy Works. “It’s time to invest that money here – in secure, renewable energy sources that are made in America, provide jobs for Americans and work for America.”

Clean Energy Works hopes to counter the massive effort from a narrow interest group seeking to block progress in a last-gasp effort that trades short-term gain for a sustainable climate and energy future. The Clean Energy Works coalition demonstrates instead broad support for climate legislation and a new energy economy. 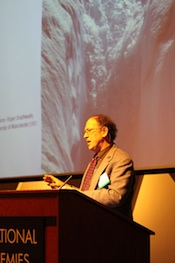