“Fifty years of U.S. Geological Survey (USGS) research on glacier change shows recent dramatic shrinkage of glaciers in three climatic regions of the United States. These long periods of record provide clues to the climate shifts that may be driving glacier change.”

Thus begins a report (pdf) released on Thursday by the U.S. Geological Survey showing a “dramatic decline” in three “benchmark” glaciers the agency has studied for five decades.

Beginning in 1957, the USGS has taken annual measurements of the South Cascade Glacier in Washington state, and followed shortly thereafter monitoring the Gulkana Glacier on the coast of Alaska and Wolverine Glacier in Alaska’s interior.

All three glaciers have shrunk and thinned, the report says, with the mass loss rapidly accelerating over the past 15 years. The South Cascade Glacier has lost nearly 25% of its weight, and the two Alaskan glaciers about 15%.

Between 1987 and 2004 all three glaciers consistently lost more snow and ice each summer as compared to years prior, the report says. Combined with less snowfall the loss has led to the net decline of the glaceirs.

The three benchmark glaciers tell the story for most of the many thousands of glaciers across the country and worldwide.

In addition to these three glaciers, more than 99 percent of America’s thousands of large glaciers have long documented records of an overall shrinkage as climate warms,” said USGS scientist Bruce Molnia.

The study raises concerns about diminishing freshwater runoff and the future availability for fresh drinking water in areas that depend on the glaciers for water supply as they continue to shrink – some possibly disappearing entirely. The shrinkage also changes water temperatures, effecting the habitat of fish, insects, and other animals downstream, says USGS scientist Shad O’Neel.

The ongoing study demonstrates the value of long-term research by enabling scientists to discern the difference between natural variations and man-made global warming. In the 60’s and 70’s, for example, researchers tracked the two coastal glaciers were able to determine a coincidental link between their growth and decline and natural changes in temperature of the Pacific Ocean. In recent decades, that link has weakened considerably, overtaken, researchers say, by the overall rise in global temperatures.

There is no doubt that most mountain glaciers are shrinking worldwide in response to a warming climate,” said USGS scientist Edward Josberger, “Measuring changes in glacier mass provides direct insight to the link between glaciers and climate, ultimately helping predict glacier response to anticipated climate conditions.” 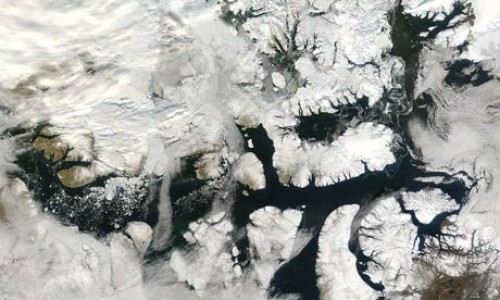