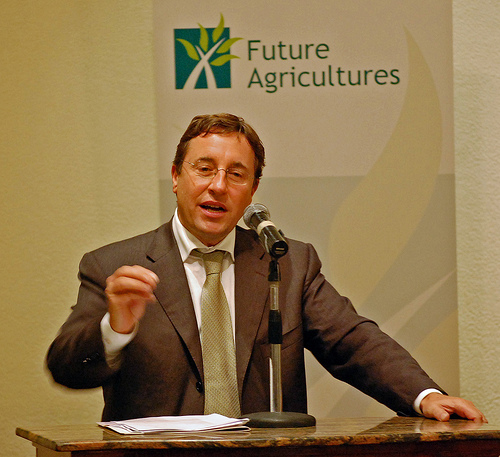 Researchers working on a joint World Agroforestry Centre–United Nations Environment Programme project suggest that integrating agroforestry in farming systems on a massive scale would create a vital reservoir for carbon storage. No less than a billion hectares of developing country farmland is suitable for conversion to carbon agroforestry projects, according to Intergovernmental Panel on Climate Change (IPCC) estimates.

Globally, the farming sector offers “the largest readily achievable gains in carbon storage, if best management practices were widely adopted,” according to a UNEP report released in June. As much as 6 gigatonnes (billion metric tons) of CO2 equivalent, or as much as to 2 Gt of carbon, could be captured and stored each year by 2030. That’s comparable to the current emissions from agriculture, according to the report.

Working to realize this goal is even more promising and feasible given that many of these “green” agricultural practices can be implemented at little or no cost. Moreover, the majority of this potential – 70 per cent – can be realized in developing countries, UNEP points out.

“If implemented over the next fifty years, agroforestry could result in 50 billion tons of carbon dioxide being removed from the atmosphere, about a third of the world’s total carbon reduction challenge,” Dennis Garrity, director general of the World Agroforestry Centre and co-chair of the Congress Global Organizing Committee, stated in a UNEP news release.

A study completed by World Agroforestry Centre scientists on fertilizer trees that capture nitrogen from the air and transfer it to the soil indicates that their use can reduce the need for commercial nitrogen fertilizers by up to 75 percent while doubling or tripling crop yields. “These results should make agroforestry appealing to farmers,” Garrity noted.

An inability to reliably measure, monitor, forecast and verify how much carbon farmers are capturing and storing is a major hurdle to realizing this goal.

In May, UNEP, the World Agroforestry Centre and the UN General Environment Facility being managed by the World Bank launched the Carbon Benefits Project, a partnership with an initial $9.16 million worth of funding that aims to bring together the latest remote sensing technology and analysis, soil carbon modeling, ground-based measurements and statistical analysis to fill this void.

The University of East Anglia’s Overseas Development Group, Colorado State University, the World Wildlife Foundation (WWF) and Michigan State University are partnering with national organizations in a number of countries to see the project through to fruition.

Sealing the deal in Copenhagen

UN Under-Secretary General and UNEP executive director Achim Steiner has been emphasizing the need to take a natural and man-made systems-wide approach as he has been promoting the widespread development, promotion and adoption of sustainable agricultural practices that can address food, energy and job security, as well as poverty and the preservation of biodiversity.

Steiner has also been urging government leaders and representatives to incorporate policies and measures that do so into any global climate change agreement that succeeds the Kyoto Protocol. Doing so is critical, particularly given the urgency of reaching a global climate accord in Copenhagen this December, a development that proponents have been working hard to bring about.

“Addressing the range of current and future challenges – from the food, fuel and economic crises to the climate change and natural resource scarcity ones – requires an accelerated transition to a low carbon, resource efficient Green Economy for the 21st century,” Steiner stated.

“Nations must seal the deal on a comprehensive and scientifically-credible new climate agreement in Copenhagen – there is a lot at stake, not least the future of agriculture and farmers’ livelihoods. One key step will be for nations to agree to a scheme for Reduced Emissions from Deforestation and forest Degradation (REDD) which will pave the way for preserving forests and other key ecosystems, as well as closing the gap in global demand for sustainable timber by shifting production from forest to farm.

“Farming will be either part of the problem or a big part of the solution. The choice is straight forward: continuing to mine and degrade productive land and the planet’s multi-trillion dollar ecosystems or widely adopting creative and climate-friendly management systems of which agroforestry is fast emerging as a key shining example.”

A product of the New York City public school system, Andrew Burger went on to study geology at the University of Colorado, Boulder, work in the wholesale money and capital markets for a major Japanese bank and earn an MBA in finance.