Is Bjorn Lomborg’s environment theory merely a thought experiment that consists of People and Profit but not Planet? That seems to be the verdict of Michael Pawlyn, a London architect who recently blew apart key components of Lomborg´s latest book Cool It at a conference of the British Council Office (BCO) in Edinburgh (see the YouTube videos below).

Lomborg, who says that the climate is not a first priority in terms of an economic cost/benefit analysis of solutions to world problems (ranging from Aids, malaria, potable water provision), cannot help it but litter his argument with blanks when it comes to thinking constructively about climate change.

Lomborg gets a lot of press attention because he does exactly the opposite of constructive thinking – he points out the costs of what he believes is “exaggerating” the problem of climate change.  In making climate secondary to issues such as Aids, and claiming the payback is much better that way, he only gives us half the picture but makes everybody who pays attention think of the whole problem nevertheless.

The observant reader will spot the biases Lomborg has without all that much trouble. His sourcing is extremely one-sided. Well known skeptics such as Indur Goklany, Richard Linzen and Patrick Michaels and Roger Pielke were quoted 21 times in the book, whereas well known climate scientists such as James Hansen, John Holdren, John Houghton, James McCarthy, Stephen Schneider and Kerry Emanuel were not quoted once.

Lomborg puts into plain English what we’ve failed to recognize as the weak link in our approach to development and life on the planet for the past decennia. So Michael Pawlyn, departing from the assumption that sustainable economics can be virtually cost free, did not have too much trouble to take apart Lomborg’s destructive reasoning.

Armed with around 20 slides, Pawlyn efficiently filled in the blanks in Lomborg’s argument, pointing out where he’s biased by consulting only a particular breed of scientists.

The gist of the rest of Pawlyn’s argument corrected Lomborg’s idea of “Profit”.  The incorporation of natural systems into economic thinking is exactly what Pawlyn says Lomborg’s argument lacks.  Lomborg’s calculations of the cost of carbon are a clear example of this.

The Scandinavian statistician estimates the cost/benefit of carbon dioxide at $20/$2 per ton in his book Cool It. (Since the publication he more than doubled the benefits side of the equation to around GBP 5 a ton).

Pawlyn asserts that Lomborg’s calculations are essentially very basic. “There are some things that cost that, but there is a hell of a lot that doesn’t”, he said, citing a 2007 MacKinsey study looking at all the different carbon abatement options with wildly varying costs and applicability.

For instance, a simple and cheap carbon abatement option like energy saving light bulbs cannot be calculated in the same way as an expensive technology such as carbon capture and storage.

As for Lomborg’s assertion that climate change is exaggerated, his grounds are extremely feeble. Cool It cites IPCC figures indicating a rise in sea levels of 18 to 59 cms (something that has recently been analyzed as a gross underestimation by various reputable institutions). But the book omits to include the accompanying comment by the IPCC researchers that this will be an 18-53 cm rise plus an unknown extra rise from various other factors.

Lomborg also completely ignores to put a monetary value on natural resources, i.e. ecosystem services. These are estimated at around $33 billion annually by mature, selfrespecting economists. “Call me picky but that seems like a big number to miss out on in your [carbon price] calculations. […]” said Pawlyn.

I agree with Pawlyn. You can argue that the rest of the world is only now waking up to eco economics, but hey, if you write a book about why global warming is not economically the number one biggest problem we’re faced with, you’re missing out on something essential if you fail to even admit that others assign a monetary value to the ecosystem.

This issue also results in Lomborg’s belief that if we spend money on climate change, there is less available for other world problems. Pawlyn rightly points  out that the way we manage carbon emissions should not necessarily be seen as competing with other world problems. Carbon management can be an income earner rather than a cost post, which is more than what can be said for Aids prevention methods.

”When we think about nature, we are inclined to think that it’s all about competition. But if you look at mature ecosystems you’re just as likely to find remarkable examples of symbiotic relationships; organisms that have evolved to hook up for mutual benefit,” says Pawlyn.

The London architect has himself developed technology that incorporates biomimicry. A powerful example is CSP, concentrated solar power. This works by mimicking the behavior of beetles. The technology focuses the sun’s heat in mirrors to create steam which in turn drives turbines. It works very well in what you could consider as adverse circumstances. CSP needs a supply of demineralized water to keep the mirrors clean. Incidentally, that is where seawater greenhouse technology comes in, another biomimicry-based solution developed by Pawlyn and his colleagues. It creates distilled freshwater from seawater. The dual technology, when combined in a project, has a payback period of between six to twelve years. In one go, it generates energy, fresh water and combats desertification in areas where resources are scarce by cleverly using sunlight. All for free after a certain period!

All in all, the debate between the two environmentalists was a microcosm of what is happening elsewhere in the world. International climate negotiators will no doubt be involved in very similar issues. Let´s hope they don´t get bogged down in what, in less revolutionary fields, would be termed semantics and that at the end of the day is just a matter of political will. 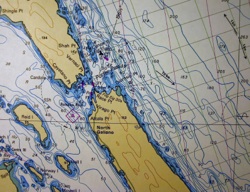 One thought on “Does Nature Provide Us With A “Free Lunch”? Assessing the True Cost/Benefit of Environmental Stewardship”