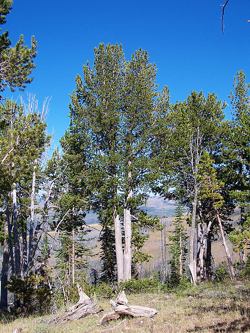 Throughout the western United States, the Whitebark Pine is dying.

Whitebark pine grows at high altitudes through western North America and is an important part of the ecosystem, supporting animals that such as grizzly bears, elk, and grouse that eat its seeds, as well as animals that seek shelter beneath the tree. According to a report in the Natural Resources Defense Council’s (NRDC) OnEarth magazine, researchers have found that three times as many grizzlies die in bad whitebark pine years as in good ones.”

The Assault on Whitebark Pine Trees

The tree is being assaulted on several fronts. For over a century, whitebark pine has been blighted by blister rust, a fungus that originated in Europe. Adding to that is the fire management regimen of the U.S. Forest Service. Fire is an essential element of the forest ecosystem, and the fire suppression practices of the past hundred years has allowed other species like fir to thrive and compete with the more fire-tolerant whitebark where before the competing fir was kept in check by naturally-occuring low-intesity fires.

And now comes the mountain pine beetle, eating their way through huge swaths of trees, “killing them by the thousands”, as they march to ever higher altitudes due to warming temperatures over the past few years. The sudden “invasion” of the beetle leaves the already stressed pine defenseless to their destruction.

What if the Whitebark Pine Becomes Endangered?

The consequences of inclusion on the Endangered Species List are to “force the U.S. Forest Service, and other federal agencies, to consult with the U.S. Fish and Wildlife Service regarding their fire management practices… it will trigger the requirement that essential whitebark pine habitat be given special protections. Finally, it will force the federal government to prepare a recovery plan for whitebark pine,” says NRDC’s Andrew Wetzler in his blog, adding,

…the most important thing we can do for the tree is to get a grip on global warming pollution.” Mitigating global warming will lower temperatures in the tree’s range, the only protection it has from the mountain pine beetle, which in turn strengthens the entire ecosystem.

“Getting a grip on global warming pollution” is not likely to happen, even with an ESA listing, at least under the tenure of Interior Secretary Dirk Kempthorne, who has made it clear that the ESA can’t be used to mitigate global warming. Can George Bush and his minions get out of Washington soon enough? Perhaps – though Bush has already done his best to render the Endangered Species Act as meaningless. The petition period for the whitebark pine spans the presidential period. It will ultimately be the Obama administration and incoming Interior Secretary Ken Salazar who decides on the fate of the tree.