Germany is leading an effort to create an international renewable energy agency that would provide practical advice and support for industrialized and developing countries aiming to foster and facilitate development of renewable energy technology and resources, as well as establish effective regulatory frameworks.

Representatives from 60 countries met in Berlin in April at the invitation of the German government to participate in the ‘Preparatory Conference for the Foundation of the International Renewable Energy Agency’ (IRENA). Follow-up workshops, held on June 30 and July 1, addressed IRENA’s initial working program and its statutes and finances.

The German government and IRENA participants see the need for an international agency that can accelerate the process, maximize efficiencies and reduce costs and redundant efforts by assuming tasks that are either being met through bilateral exchanges or not being addressed at all due to lack of resources or money.

IRENA will close an institutional gap according to its proponents.

What is needed is an organization that can guide and coordinate activities in the area of renewable energy on an international level so that their impacts are maximized. With their limited mandate and capacities, current international renewable energy associations and networks cannot fill the institutional gap the way that IRENA could.”

Despite urging by UN climate scientists and policy makers, the massive capital and transfer of technology required to fuel widespread international development and use of renewable energy has been slow in coming.

To date, only a minority of states have shown themselves willing or able to introduce efficient renewable energy policies (including appropriate legislation and institutional frameworks), develop effective industries, assess their national potential and promote research, development, education and training,” according to IRENA.

We now need to disseminate best practices and lessons learned in order to give countries wishing to profit from the many benefits of using renewable energy the support they need to exploit their vast domestic potential. IRENA will carry out a broad range of activities to meet these needs.”

According to its statutes, IRENA’s objective is to “promote the fast adoption and the sustainable use of renewable energy worldwide, taking account of its contribution to security of supply, environment and climate protection, economic growth and social cohesion, regional development and inter-generational equity.”

IRENA’s looking to get out of the blocks quickly. The statutes are to be finalized at a ‘Final Preparatory Conference for IRENA’ to be held at the end of October, and a ‘Founding and Signing Conference’ has been scheduled for November.

A start-up working program has been drafted and is to be enacted in the run-up to the final preparatory meeting and founding and signing conference. Its two focal points are to being advising national governments on developing an integrated approach to promoting renewable energy and establishing an Internet communication platform. 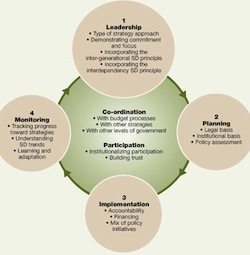