Conventional wisdom, when re-confirmed, tends to generate plenty of admiration, especially of new converts to all things ecological. And to give common sense its dues; my better blog posts tend to cover issues that make me bond with other people. But not so this story. What follows is literally an off the beaten track article involving a climatologist´s idea to clear up some of the dead wood in forests and burying it in zero oxygen underground shelters to combat global warming.

The plan d’action sort of goes against all your instincts at first, but when executed right, it could be an insanely brilliant solution. Despite the aversity you might feel to treating wood as if it were nuclear material and interacting with the forest bio rhythm, hearing out climatologist Ning Zeng’s argument is no waste of time. Zeng, who’s attached to the University of Maryland, published his ideas in a paper which is now marked ‘highly accessed’ on the Carbon Balance and Management (CBM) website. Aside from attracting a lot of CBM readers, Zeng’s paper was picked up by a number of authoritative international publications, including ScienceNews,  and the New Scientist, triggering interesting online discussions.

In short, these are the reasons Ning Zeng cites for sweeping forests and properly burying limited amounts of dead wood; Every year, some 60 gigatons of carbon is soaked up by plants and trees. But when these lovely plants give the ghost at the end of the season, the temporary habitat slowly releases the carbon back into the atmosphere again. Zeng says that if you leave enough coarse woody debris lying around to nurture new cycles and keeping other bio systems intact you can remove the remainder (about one sixth of all dead wood) before it sets out to rot. This way, huge amounts of carbon can be sequestered.

Zeng calculated that the amount of carbon created by US dead woody debris is likely as big or bigger than all fossil fuels-caused greenhouse gas emissions. After cleaning up the forest and creating a one time big effect, taking one sixth of dead wood annually would potentially sequester 10 gigatons of carbon a year. That’s more than all fossil fuels emit.

So what to do with the dead wood? Zeng’s solution is reminiscent of nuclear waste disposal ideas. He believes that it’s best to simply dig big holes in the soil and bury dead trees to create a kind of continuous carbon sink. The cost of burying the wood is around $14 per ton, according to Zeng´s calculations. Dead wood per square kilometer of forest would fill trenches the size of a small houseof an average 10×25 meters which would be 10 meters deep. In total around 10 million trenches would have to be dug in the US for 5 billion tons of carbon to be stored annually.

Zeng’s been doing some risk analysis too and says that some types of soil will effect the creation of methane gases, which is the worst of the greenhouse gases, he told New Scientist. So it´s careful trodding, this business. Some of the people responding to an article in New Republic.com suggested that the dead wood´d best be dumped in empty oil wells and underground mines. These are currently being investigated as the solution of choice for the really nasty stuff; the carbon captured from fossil fuel plants.

A real problem with burying a biomass like trees and plants is that you´re dealing with nature and that all sorts of little insects could mess up the project by puncturing holes in the airtight burial chambers. Bradford Plumer, a New Republic.com reporter is wary of this and more dangerous risks. “Even worse, clearing dead wood away from forest floors on such a large scale could, if done clumsily, wreak havoc on a number of habitats. That’s probably my biggest worry: This isn’t mass deforestation, but a forest-management scheme of this sort could very easily be abused, and almost certainly would in practice”, he comments.

That´s a sensical issue to raise. But there´s also a less than rational angle to this saga. From the reactions Zeng has triggered, it is clear that ideas that do not strike us immediately as ‘natural’ and which involve managing nature are putting us at a seemingly new type of crossroads. But fact of the matter is that nature’s tremendously rich and makes for massive hidden dramas every day. Also, your average park ranger has likely been messing around with a lot of wood clearing issues for donkeys years.

The New Republic´s reporter Bradford Plumer confessed to a faulty type of scepticism of this kind rather conspicuously. “Usually, when anyone claims to have a simple, elegant solution to the problem of runaway greenhouse-gas emissions that doesn’t require a massive restructuring of the world’s energy policies, well, I narrow my eyes and keep a hand on my wallet.” He then in equally glorious phrasiology describes the ‘eyebrow raising’  solution, concluding that this is not so bad an idea at all in spite of risks to the eco system.

In my opinion, Zeng makes tremendous sense. Living in the Netherlands, where every inch of forest is managed, I know first hand that not all human interference with forests is bad. Also, sequestration of dead wood -when carried out carefully and perfectly- is among the most efficient methods to reduce greenhouse gas. What makes humans loath burying wood though is that we´d be resorting to nature to combat a problem that we ourselves have yet to find matching technological solutions for. 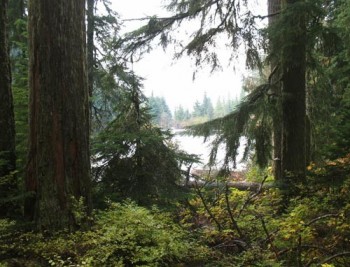